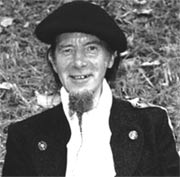 KEN Skeel, who has died aged 61, was a veteran of the campaign for a Scottish parliament, free thinker and raconteur.

His wit and courage never failed him and after hearing he had terminal cancer he jokingly told his partner, Nell, that for his funeral arrangements he wanted to be thrown into a smouldering volcano.

In the early 1990s he was caught up in the movement for devolution and for five years he was a leading light of the vigil which took place at the foot of Edinburgh ‘s Calton Hill until it ended with the Labourvictory in 1997.

Skeel was also an artist whose work was part of his campaigns. Just a few short years after the vigil, he unfurled a beautifully painted banner which bore the legend “Sic A Parcel O’ Rogues In A Nation” outside the new parliament at Holyrood as part of his next campaign, Save Our Old Toon.

Latterly, he was involved in this protest about the erection of a new glass and concrete five-star hotel and shopping mall in the shadow of Waverley Station.

To Skeel, the Old Toon was more than a tourist destination, it was home, and he longed for it to retain a sense of community. He also despised the anonymity, as he saw it, of much modern architecture, which he felt was without a sense of place. Although a traditionalist in many ways, he did admire the architecture of the Scottish Parliament, admiring the way it fitted in with his neighbours on every side.

Skeel wanted to see the Old Toon’s unique character respected and revived in its new buildings, whether traditional or modern. He also liked Glasgow ‘s Museum of Religion , which he felt achieved this.

Skeel made a living painting and decorating, but his backdrops also adorn many houses, restaurants and museums in Edinburgh and other parts of Scotland . He had several commissions in the new Museum of Scotland and was perhaps proudest of painting the Declaration of Arbroath in fine calligraphy on to the wall there. He also painted murals in Bar Roma and Ryan’s Bar in the city’s west end.

Skeel was a tall man with a unique sense of style and, when decked in plaid and with his long beard plaited, a memorable figure.

He loved to walk, and when visiting friends in outlying areas of Edinburgh , such as Musselburgh and Balerno, he would refuse to catch the bus, preferring to cover the ground on his own two feet. As a younger man he twice travelled overland to India , once in an army ambulance and once hitching, by train and, his friends suspect, walking a great deal of the way.

More recently he refused to travel by plane because of environmental issues and he and his partner, Nell Dunn, lived a fairly quiet life in their Old Toon flat, which was often adorned with a banner hanging out the window.

Skeel met Nell, a niece of Tom Sutherland, who was a hostage in Beirut for several years, in 1974 after he returned from India . She was 22 at the time and recalls how he was the only one of her boyfriends who would turn up at her parents’ farmhouse near Airth unexpectedly on foot, having walked miles from the station.

Skeel was born in Drummond Street , in the Old Town , where he was delivered by a next-door neighbour in 1946.

But he had a troubled childhood and youth, losing his father when he was a child and his mother when he was 15. His older brother, who was in his 20s, took care of him as best he could but Skeel, although he got into art college in Edinburgh age 16, ended up transferring to Dundee and then dropping out.

However, after he met Nell he found stability and enjoyed a rewarding home life. The couple, who had no children, were close and worked together on many painting jobs. Skeel, who liked to chew the fat and debate the state of the world with Nell or other friends over a dram or three, will be much missed.

Nell herself died just a few months later of cervical cancer which she had been fighting bravely for some time. When Kenny died, she purchased a double plot at Corstorphine Hill but just before her death she changed her mind about being buried there and was cremated instead.

This is an updated version of his obituary, versions of which were published in the Herald, the Scotsman and the Guardian.