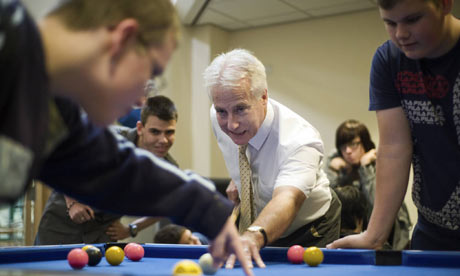 Walking around special school Abbey Hill technology college with recently retired principal Mike Vening feels a bit like touring the enclosure at Ascot with a member of the royal family. Everyone stops to exchange a smile, a few words, or to pump his arm.

Carl Scott, 17, is clearly delighted to see his old head: “He was fantastic. We always liked winding each other up. We had jokes and a laugh.”

Natalie Richardson, 18, who is learning hairdressing, agrees. “He was always funny and cheerful. He used to take the assembly and he said good things.”

Much of the bustling campus, which serves the needs of almost 300 students with special needs aged 11 to 19 from Stockton-on-Tees, came into being during Mike’s 11-year headship. There is the main secondary school building, which bears a plaque to commemorate its opening by education secretary Estelle Morris in 2000, another building housing a 16-19 college with a polytunnel and beehives outside it, a separate building for autistic students, a unit for very severely disabled children, and more.

The school also achieved national recognition and awards – it was the first special school in the country to gain specialist status as a technology college, it is recognised by the National Autistic Society as a centre of excellence for autistic education, and it is the lead school in a leading edge partnership, which made Mike an executive head.

The judges who selected Vening for the Ted Wragg lifetime achievement award said that over his 21 years at Abbey Hill, he showed that young people with special needs “can be valued and valuable members of the community”.

Business manager Edwin Thorman recalls: ” Mike had just arrived when the specialist status option became available. I was saying, just get settled in first. But Mike was more visionary. It was new, but he saw what it could mean for us and how we could capitalise on it.”

In a darkened room in their special unit, some seriously sensory-impaired children and their helpers are enjoying exploring the effects of light and touch with a range of interactive technology. This expensive equipment was bought with extra funding that came with specialist status.

Thorman said: “No child is ineducable. This technology can stimulate them, and help them to understand the relationship between cause and effect.”

Technology is used widely throughout Abbey Hill. “In a conventional classroom, a teacher who is demonstrating cookery tells the class to come over and watch. Our students may not be able to do that. So a close-up camera is trained on what the teacher is doing, and it is displayed on a big screen with a written narrative.”

Thorman was an ICT teacher in a mainstream school, and it was his involvement in using technology to enable a boy with cerebral palsy to use a word processor that brought him into special education. “He had never been able to write or communicate in any written form before and, when he could use the word processor, he started writing poetry. That blew me away and I thought, this is what I want to do.”

Vening is proud of having achieved specialist status for Abbey Hill. “They hold their head high leaving here because they are in a position where they are at a technical college and not a special school,” he says. “That can be where the pitch about inclusion falls down – we underestimate the upset and stigma that goes with some of the terminology we use.”

The recognition by the National Autistic Society, which involves having to show annual improvement, is another key achievement. This is for creating an environment “where they are not made to feel anxious, but where the challenge and demand of them is nonetheless rigorous.”

That seems to be the guiding principal across the whole campus, where there is a notable sense of energy and focus. School students are in uniform and give every indication of working hard, but there is a more collegiate atmosphere in the 16-19 building. That, too, has been popular with students.

The downside is that having to leave here at 19 remains a challenge for many. Partnerships with local FE colleges for further study and with firms such as a builders, caterers and solicitors mean that for some, “if they can meet the criteria for being a good worker”, there will be job opportunities. Within the college, enterprise has a high priority.

“We do jewellery making; we have a wood enterprise making benches and bird tables, greetings-card making; we keep bees, sell honey and beeswax; and we do bicycle repair and maintenance, repairing them for young people and also sending them to the third world.”

Vening was disappointed when an attempt to create another annexe for 19 to 25 was knocked back. “If we could keep them here until age 25, they could be protected from a society that is focused on material gain for a bit longer. At the end of that time, I hope they would be able to make sensible decisions from a position of confidence about what they might be able to do rather than feeling they had failed.

“The decision might be: I can’t compete in the job market or the academic world, but I want to take part. Society needs to find more ways for them to do that.”

Vening, at the end of his career just as  at the start, is pushing the boundaries of special education. “The limit of what we can do is really the limit of our imagination.”