What should be in the curriculum? Thanks to a cutting-edge initiative at a Scottish school, SpongeBob SquarePants, Dr Who, The Titanic and Famous People are currently taking top billing in the classroom.

From the Education Guardian, June 15 2010 with added material which did not appear in the published article.

Photograph: Murdo MacLeod for the Guardian. 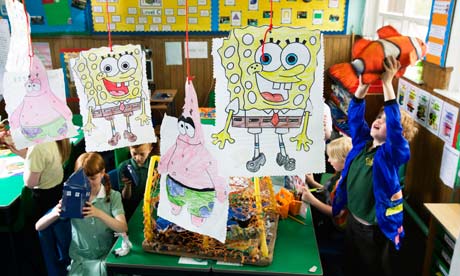 St Mary's primary in Leith, Edinburgh, is taking advantage of wide freedoms under the new Scottish Curriculum for Excellence to allow the children to choose their own topics as a jumping-off point for learning.

The use of topics as Trojan horses for smuggling maths, literature and science into children's heads has been popular since the 60s, but in the recent past much more detailed national curriculums both north and south of the border made it harder for schools to do this and gave them a more limited choice of themes.

Scotland’s new freestyle curriculum was devised under Labour, but the SNP government chose to press ahead with it. Wales introduced its skills-focused curriculum in 2008. But a similar curriculum for English primaries, due to start in September next year, now lies dead in the water, harpooned last week by the schools minister, Nick Gibb. The planned curriculum, which moved the emphasis away from what was taught on to producing confident, lifelong learners via six “areas of learning”, was devised following a review by Sir Jim Rose.

Now schools must wait and see how the new coalition will fulfil its twin promises: on the one hand to create a slimmed-down curriculum that gives teachers more freedom, and on the other, to restore traditional content such as kings and queens and classic texts.

At St Mary’s, my own nine-year-old has, since this initiative was introduced, developed a proprietary interest that his older siblings never showed in his current class topic. This term it is “the sixties”. He has tie-dyed his own T-shirt, and tells me about the moon landings and John Fitzgerald Kennedy.

The headteacher, Stephen Gilhooley, says: “Under the old curriculum, we would know more or less what a child would be doing all the way through primary. Teachers planned everything; it was very much teacher-led. Some of the topics that came up year after year … even the teachers were bored by them, and it is hard to enthuse a class about something you are bored by. There was one called: ‘A Scottish Island’ and, beautiful as they are, there is only so much you can do with that.”

He explains that a major criterion of the new Scottish curriculum is about giving children “ownership of what they want to learn”.

“There are many ideas coming from the children. The teacher can manipulate where they are going and they can run with their enthusiasm. They can talk to the children about getting a balance across the year.

“In the past, the teacher would just have said, ‘Now we are going to do the Victorians’.”

Is SpongeBob really a suitable topic? Gilhooley admits that some themes work better than others. “It is a starting point,” he says. “It is really all about letting the children have their say, and they are using SpongeBob as a way of developing reading and writing and to think about under the sea and other things.

“Some of the children don’t have very wide frames of reference and they really like being able to select something they are familiar with.

“I think teachers need to be allowed to take risks in the classroom and not always play it safe.”

The school is full of artwork that the children have produced to illustrate their themes. Pop art and Beatles pictures dominate the 60s display. The Titanic classroom is decorated with a huge wall-hanging model of the ship and papier-mache lifejackets. Along the hall are cardboard Tardises and a record of a trip to the Glasgow Science Centre.

Some classes have made more conventional choices – The Egyptians still made the grade for year 3 and year 2 chose Minibeasts.

John Davis, senior lecturer in education at Edinburgh University, says the approach will be hard work for teachers. “And schools will also have to work at allaying parents’ fears.” He also says: “To mean anything, it needs to be a real choice, not one of those ‘do you want a blue book or a yellow book’ choices that these things sometimes turn into.

“But, if you consider that in the UK we are supposed to have taken on the rights of the child under the UN convention to have a say in decision-making, then I think this is our obligation. We do need to involve children in planning their own learning.”

Last week in England, Gibb announced that the coalition government would make changes to the national curriculum both “to ensure a relentless focus on the basics and to give teachers more flexibility”.

Many in the profession south of the border have voiced “disappointment” at the news. “We were so close to getting the new curriculum,” says Mari Jones, head of Ombersley first school in Worcestershire. “Now it feels as if there is going to be a hiatus where we don’t quite know what’s happening.

“It is so frustrating. I know all the work that has gone into the new curriculum at this school and centrally. It was based on two independent reviews. It was not political. This is the way things are going in other countries, too.

“It was about giving the children the research skills they need, not filling them full of the facts which, for some children, can be a real turn-off in education. It was very much about developing the whole child.”

Rose says: “It is disappointing but it is not entirely dispiriting.” He says the new government is indicating that it supports the concept of more flexibility. “Elbow room for teachers is crucial and that is what the Rose review was all about. I would have liked to go even further with that but it is not easy – as people will discover – to get subject specialists to agree on that.”

Richard Kieran, headteacher at Grimley and Holt CE primary school, says he feels like the supporter of a football club that was about to get a new playing surface, “and then you get another chairman coming in who says, ‘Actually guys, we are just going to bumble along as we are for a couple of years without setting the world on fire’.” He queries claims that the move will save money. “A lot of money has already been spent on this and now that is wasted.” He is also sceptical about the government’s plan to ask well-known experts to write areas of the curriculum. “How much is it going cost to bring Professor Niall Ferguson over from the US to tell us how to teach history?”

But Mick Brookes, general secretary of the National Association of Head Teachers, says although his first reaction to last week’s news had been “disappointment”, he now feels “there are opportunities here”. The new education secretary’s repeated emphasis on greater freedom for teachers was to be welcomed. “I would take that as an invitation to schools and heads to use their professionalism and to get on with innovative work, which is possible under the current national curriculum, and not to wait around for two years waiting to be told what they should be doing.”

At At Mary’s, after initial discussions, suggestions are put to a vote. Does this risk leaving some children out in the cold?

No, says Audra Buist, who teaches year seven. “The children have to choose something that they really want to learn more about and once we have thought about each idea and what it could involve, they tend to agree on something that will be really interesting. Sometimes, after we have had a discussion, they don’t even vote for their own suggestions.”

Her class’s current choice is “pulleys lights and ropes”. “We have pulleys they can use in the playground. They are really looking forward to it.”

Earlier in the year, this class plumped for “Famous People”. “I changed that into ‘The Great Balloon Debate’ where they had to argue about which famous person had changed the world the most. Winston Churchill won. They were hugely engaged by that.”