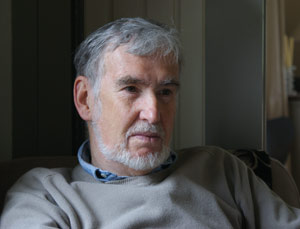 Born: 26 July, 1943, in Gillingham,  Kent.
Died: 8 September, 2010, in Dirleton, East Lothian, aged 67.
A thinker, a talker and an intellectual free spirit, as well as a teacher and a prolific writer, professor John Orr, Professor Emeritus in the School of Social and Political Studies at Edinburgh University, leaves many gaps with his sudden death at the age of 67.

One of those will be in the cafe of the Edinburgh Filmhouse where the internationally known film theorist often sat in lively discussion with students or fellow cineophiles, chewing the fat over what they had just seen. On 13 November, the Filmhouse is to show a tribute screening of one of his favourite films - Ingmar Bergman's Winter Light.

“It is a very bleak film, about a man facing the fact that there is no God, and John didn’t believe in God. He had a very personal connection with the film and on a November day in Edinburgh, I imagine it might feel quite appropriate,” said filmmaker and writer Mark Cousins, who became friendly with Orr when they collaborated over the Edinburgh Film Festival in the early 1990s.

“I thought I needed to beef up the intellectual content of the festival so I got in touch with John and we became collaborators. He knew so much but he never talked down to anybody.”

“I work in film production and most people aren’t that knowledgeable. That was one reason why I appreciated John. He was a great man to sit at the table with. It was like having the history of world cinema sitting opposite you. We shared a flat in Cannes each year and we would come back at night, have another glass of wine and look across the sea and talk about the day’s films.”

Orr’s passion for cinema was what really stood out, both in his writings and in his talk. His colleague Martine Beugnet remembers frequent arguments over the work of French film maker Philippe Grandrieux, whose early films Orr claimed were morbidly self-indulgent. “But then we went to see his most recent film, Un Lac, and after all these years, John loved it. He wasn’t afraid to change his mind.”

Orr had no time for the clichéd view of British cinema being all about gritty realism. He took British cinema seriously as art and saw the work of filmmakers such as Terence Davies, Ken Russell and Derek Jarman as being essentially romantic.

He was also a fan of the Scots filmmaker Bill Douglas and excited by the work of new Scots filmmakers such as Lynne Ramsay (who made the acclaimed Ratcatcher and Morvern Callar) and Andrea Arnold (Red Road and Fish Tank).

Born to Protestant parents from Belfast but raised in England, Orr was educated at Watford Grammar School, where he was strongly influenced by Harry Ree, the Jewish wartime Resistance hero.

Orr started off in the department of sociology and his first writings were about theatre, but he soon found cinema and became best known for a trilogy of books – Cinema and Modernity, Contemporary Cinema and The Art and Politics of Film. His most recent book, Romantics and Modernists in British Cinema, was well received and was recently chosen by film magazine Sight and Sound as book of the month.

It was Contemporary Cinema, which he read while working in the Yale university bookshop, which brought lecturer Daniel Yacavone to Edinburgh to do a PHD in film studies.

“In Britain, film studies is very Londoncentric but over the past decade, Edinburgh’s prestige has really grown and that is largely down to John Orr. John managed to remain readable while being very erudite. His passion was obvious.

“He always starts with his own response to a film. He is never just plugging the films into some fashionable ‘ism’. He had no time for fashions in film theory and he didn’t respect academic or institutional conventions either. For instance, his most recent book doesn’t have any footnotes. That is incredibly unusual.”

In his 2005 book on film, Hichcock and 20th Century Cinema, Orr also broke with convention by including a chapter on David Hume, i which he argued that Hitchcock’s notions of how to make sense of the world were based on Hume’s.

Orr, a genuine intellectual who was widely read and knowledgeable on world politics, history and literature, was a keen hiker and took regular walking holidays with his wife Anne.
John Orr was known as a private but intensely committed family man who rarely spoke about his loved ones but spent as much time as he could with them. He leaves two children and three grandchilden.

Note: This piece has been slightly amended.