Tuition fees: widening the gap between England and Scotland. From the Guardian Education Nov 15

With tuition fees in England set to rise in 2012, the divergence between Scottish and English higher education looks likely to grow.

Edinburgh University: there are four universities in Edinburgh alone, so there is some scope for merging of functions and facilities.

Photograph: Murdo MacLeod for the Guardian

Five centuries ago, while the gilded youth of England headed off to Oxford each autumn with their retinues, the kilted sons of Scottish fisherfolk and farmers – tradition has it – walked to Scotland's ancient universities, each carrying a bag of oatmeal on their shoulders – rations for an entire term. 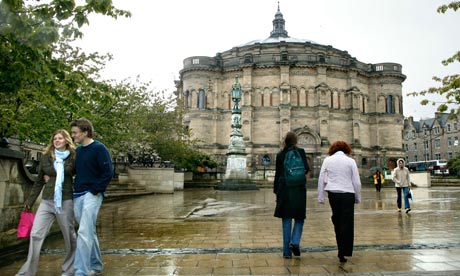 Perhaps it was this different history that was in the mind of Scotland’s education secretary, Mike Russell, when he said last week that charging for university education is “not in the Scottish tradition”.  If south of the border students are to be asked to find large sums of money so that universities can maintain their position in the world, north of it there is likely to be much careful squeezing of the toothpaste tube of university resources to produce a “Scottish solution” to the issues of higher education funding addressed by the Browne review in England.

By 2012 it is likely that the two countries’ university sectors will again be on diverging paths. England – implementing a revised version of
Browne – will be on the high road, with students paying for the bulk of their education.

Meanwhile, Scotland will be taking the low road, with universities staying free for Scottish students although there is still the possibility
of a small post-graduation levy being imposed.

There are many as yet unfigured ramifications of this divergence. Before the introduction of tuition fees in England, it was normal for
middle-class Scots to consider English universities such as York, Durham or Newcastle. In 1997 – the year before tuition fees came in – around 10% of With tuition fees in England set to rise in 2012, the divergence between Scottish and English higher education looks likely to grow.

Scottish students attended English universities, according to Ucas. By last year, that figure had fallen to 5%. The number of Scots going to Oxbridge has declined significantly since the early 90s. And this trend is likely to accelerate when the fee differential increases, says David Barclay, president of the Oxford Student Union, a Glaswegian.

“There will be even fewer Scots,” he says. “There aren’t all that many here now, but a lot of them are really involved in the life of the university, they are the heads of societies and have taken on positions of responsibility.”

He says it’s a potential loss for Scotland if students feel they aren’t able to seek new horizons, and for Britain. “This could be one of the factors that pushes cultural separation.”

Currently, Welsh and Northern Irish universities charge the same fees as England. Thousands of their young people, a quarter of both Welsh and NI students, cross the borders to study in England. However, while almost 10,000 English students were accepted by Welsh universities last year – more than a third of Wales’s total UK student body – only 274 English students went to study in Northern Ireland.

There would clearly be huge implications for Welsh universities of moving to a radically different funding regime from England. They fear they could become underfunded. However, the Welsh executive is not rushing to embrace the English proposals. The Welsh education minister, Leighton Andrews, has said he will “take time to consider the implications”.

In Northern Ireland, too, a recent review recommended sticking with the current cap of £3,290, but there is to be another review of the implications of moving to a different funding regime from England.

Edinburgher Rosalyn Old, studying land economy at Cambridge, says she would not have gone there if fees had been any higher. “I came to Cambridge because it is the only place where you can study land economy. But very few of my friends even considered studying in England. If it had cost any more, I couldn’t have justified it. I would have had to stay in Scotland and do a second choice of subject.”

Another pressure on students such as Old is that the Scottish government is relatively less generous with loans. A Scottish student with a parental income of £60,000 is entitled to borrow only £915 a year; in England the comparable figure is £3,500.

Last year, too, about 15% of the total number of British students accepted by Scottish universities was English – this number has been on the rise.

Liam Burns, NUS Scotland president, says: “We don’t want to see a knee-jerk increase in fees for English students. But if they are having to pay £9,000 to study at an English university and it remains so much cheaper up here, there are some fears of Scottish students being squeezed out. There might need to be a quota system.”

Universities Scotland last month published a report, Towards a Scottish Solution, partly looking at ways in which the university sector can be pared to survive hard times. One idea is to cut back on the four-year degree, which sets them apart from England. Universities want to maintain their foundation year – originally an equivalent of sixth form. But it would become the norm for students with good A-levels or Scottish advanced highers to go straight into the second year.

There has been a massive expansion; Edinburgh alone has four universities. So there is scope for merging functions and facilities, and increasing specialisation, with one university in a town sticking to sciences while another does arts and languages, for example.

There may need to be tight control of numbers. This year, many Scottish universities took in fewer students to make up for exceeding their cap the previous year.

Finally, the report recommends increasing “other sources of income” – this includes general support for some kind of graduate contribution.

Scotland’s elite higher education institutions, such as St Andrews University, are already doing this. The principal, Louise Richardson – formerly of Harvard University – has recently been criticised in some parts of the Scottish press for spending more than £4m on refurbishing a grand official residence “conducive to entertaining potential donors” as she redoubles efforts to bring in more funds. That university, which now relies on the state for only one third of its money, is also among those currently lobbying hard for a graduate contribution.

Professor Andrew Cubie, author of Scotland’s post-devolution report, which led to Labour’s establishment of a £2,000 post-graduation levy in Scotland (abolished by the Scottish National Party in 2008), says: “Scotland is challenged by Browne. I wish we had been ahead of it in Scotland.” He says the sector would need the graduate contribution to be restored in order to carry on providing world-class education.

But, with Scottish elections coming up in May, this issue is becoming an increasingly hot political potato.

The latest polls show the SNP – which currently leads a minority government by virtue of one extra seat – trailing Labour, but quite close behind.

There are many constituencies in which the student vote – or their parents’ vote – could be crucial.

Currently, both the SNP and Labour are hedging their bets. The SNP – after six months of consultation with the sector – is to launch a discussion document or “green paper”, due in early December. Meanwhile, the Labour party is demanding urgent action in the form of a review.

Making promises on the doorstep that can’t be honoured in office may be a short-term electoral strategy, but leaving the potato to get cold is unlikely to play well either. Labour’s shadow education secretary in Scotland, Claire Baker, says the party’s previous graduate contribution was “a responsible choice”.

The SNP also appears to have been leaning towards introducing a contribution, but reading the runes suggests that there is a chance its leader, Alex Salmond, will plump for keeping it completely free. After all, he did once say: “The rocks will melt in the sun before I agree to tuition fees.”