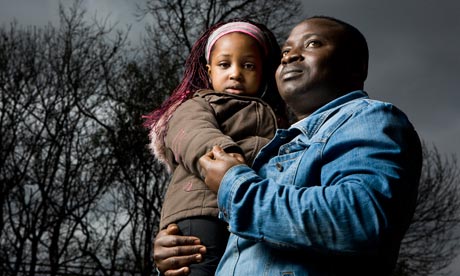 Akakpo Kangni-Soukpe and his three-year-old daughter Rose, from Togo, are among more than 1,000 asylum seekers in Glasgow being moved on. Photograph: Murdo Macleod.

A similar article appeared in the Guardian on November 24. All reference to the housing group 'Angel' was removed after a polite request for a comment was greeted with a letter from libel lawyers Carter Ruck.

“There is no way around the letter. I think about it all the time – it is the last thing I think about each evening and the first when I wake in the morning.”

The letter said that Akakpo Kangni-Soukpe and his family must be ready to leave the home they have known for three years at any time – taking just two bags, and without knowing where they are going except that it will be “somewhere within the Scotland region”.

“We do not want to go anywhere. We are enjoying Glasgow. Our neighbours have been so kind. Now we have to leave again – our home and the people we love and who love us.”

There are more than 600 other families – like the Soukpes asylum seekers housed by Glasgow City Council – who have been thrown into confusion by an abrupt letter for the UK Border Agency, part of the Home Office, announcing that an accommodation contract with the council has come to a sudden end and they are liable to be moved.

One lunch time last week several worried asylum seekers, along with friends and supporters, crowded into a meeting room at Stow College where they were urged to resist eviction. “If someone touches you, that is assault. If someone tries to take your belongings, that’s theft,” Phil Jones a volunteer at charity the Unity Centre told them. “The letter is written to scare you and that’s because the Home Office knows that if you refuse to move, they have a big problem.”

By way of encouragement, he told them how a mass campaign in the city to resist the movement of hundreds of asylum seekers to what he described as “substandard housing” was halted four years ago when 20 families, with the support of dawn patrols and pickets, resisted removal until more than £4 million was spent upgrading the facilities.

According to Jones, the crisis in Glasgow has been triggered largely by a fall in the numbers being sent there. He argues this is due to a long campaign of direct action and political protest which has made it virtually impossible to remove failed asylum seekers from the city. “We have created a space in Glasgow where the Home Office is a bit less powerful than it is elsewhere in the UK.”

It is ten years since Glasgow became the largest asylum seeker centre outside London through the Labour policy of ‘dispersal’. A city with a population in seemingly inexorable decline, the asylum seekers and their young families have in many cases been welcomed into the run-down, sprawling estates where they were housed – having asylum seekers for neighbours was less contentious than in other areas – preferable to a boarded-up flat.

For those whose applications were eventually refused, sometimes after many years, there was often a groundswell of local support through schools, neighbours and friends, with hundreds of supporters gathering to fend off dawn raids, and petitions, protests, and regular blockades of the Brand Street Home Office reporting centre.

There have been tragedies too – last year came the triple suicide of an isolated Russian family who leapt from the desolate Red Road flats after their benefits had been stopped due to their application being turned down.

But in the recent case of Florence and her daughter Precious Mhango, a ten year old who arrived in Glasgow at the age of three, protests against their threatened deportation involved not just school friends, teachers, neighbours and friends but high level politicians and even stars of the Scottish soap opera ‘River City’.

The Mhangos asylum case finally ran out of steam in early October but despite Home Office representatives knocking on many a Glasgow door these last few weeks, the Mhangos have still not been detained or deported.

It appears that, like them, hundreds if not thousands of the more than 22,000 asylum seekers who have been sent to Glasgow over the last decade, may still be living in the city as illegal immigrants.

Now, the number of asylum seekers being sent to Glasgow has fallen by more than half.

This has triggered a financial dispute. The council who charged a per head price based on high numbers of families, has asked for more money to reflect the fact that the costs of providing education, health and housing support have increased. The Home Office refused. It has not confirmed what its alternative plans are but it is likely they plan to transfer the asylum seekers in the city to lower-cost providers, YPeople, formerly the charity known as YMCA and the private sector provider the Angel Group, both of whom already operate in the city.

Across the UK, in any case, there appears to be large scale transfer of the housing of asylum seekers away from the public sector underway. Birmingham Council too recently terminated its contract with the Home Office, citing local housing need.

The Angel Group is now the biggest UK provider of housing for asylum seekers – it was paid £31 million by the Home Office last year, and its founder Julia Davey is the richest self made woman in Britain according to the Sunday Times rich list.

The Angel Group does not disclose where the asylum seekers are housed, but of course, unlike a public sector provider it does not have to fund extra services asylum seekers may need.

Glasgow Green Councillor Danny Alderslowe said: “There are huge implications of this, for the council and for the asylum seekers. My main concern is that the private company Angel Group provides a very poor standard of housing. It is all done in the cheapest way possible. They also regularly transfer people from one side of the city to another at short notice. They make life really stressful for people who are already stressed.”

At the Stow College meeting, asylum seekers echoed these concerns. One said: “My friend has been moved nine time in two years. She always has to have her bags packed. They never tell her where she is going but usually it is a completely different part of the city where she doesn’t know anyone.”

Jamie O’Neill of Positive Housing in Action, another charity supporting asylum seekers in the city, said : “We know of many cases of people being transferred several times in a year, including families with children. It does make it harder for people to integrate into their communities.”

The charity’s annual report also highlights the case of Jasraj Singh a toddler who fell from the window of a high rise while his asylum seeker mother was in the bathroom last year. The report says the window had no safety catch and that the child’s parents were evicted a month after the death because, having no further children under 18, they were no longer entitled to the accommodation. They were then housed in the home of a PAIH volunteer. The charity continues to call for a fatal accident inquiry.

Lecturer Pam Currie, who organized the support meeting at Stow, where more than 100 asylum seekers study, is also concerned moving them could disrupt their studies.

“Unlike in England, asylum seekers can study anything here. They are really keen to be in class. They are desperate to contribute to their new society. We don’t want to lose them.”

Many former asylum seekers who now have leave to remain still study there too. “It was never predicted that they would stay in Glasgow but a lot of them have.”

Currie lives in the Govan area, where she says: “Ten years ago, there were lots of gaps on the high street – now there are African businesses opening up.”

It is still true that there are plenty of ‘retail opportunities’ on Govan’s main shopping street. The shabby mall, decorated with a glass case in which sit a dead golden eagle and a jackal, both stuffed and looking a little out of place beneath the tinsel, is half empty.

The most recently opened business is indeed an African hairdresser–cum-deli, owned by former asylum seeker Albert Mbaki and his wife Marie.

But “life is hard in Glasgow,” says Albert. The Mbakis are clinging on by their fingertips, in a street where few businesses apart from the criminal lawyers and the bookies appear to thrive.

“We want to work but it is hard to find a job,” says Mbaki, once a maths teacher in the Congo. “And the climate is not easy either. But the people of Glasgow are very approachable. We do feel welcome.”