Could Scottish students lose out as university places are offered to English school-leavers with lower A-level grades? 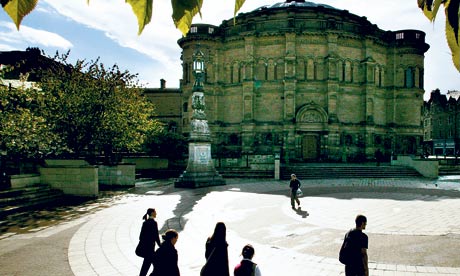 The McEwan Hall and Bristo Square at Edinburgh university. Photograph: Murdo MacLeod for the Guardian

Adam Smith, Charles Darwin, a couple of signatories of the American Declaration of Independence and Gordon Brown all graduated from Scotland’s premier university – Edinburgh. A degree from the ancient institution – recently ranked 20th in the QS world rankings, above Berkeley, California, and the London School of Economics – is the gold standard of Scottish education. But some fear that next year the creme de la creme of Scottish schools could miss out on places, turned away in favour of students prepared to pay English gold.

From next autumn, under legislation currently going through parliament, Scottish universities will be able to accept as many English, Northern Irish and Welsh students (“rest of the UK” – RUK – students) as they want – and Edinburgh recently announced it will charge them £9,000 a year in fees for up to four years.

The Scottish government will pay only £5,000 a year for Scottish students studying on many courses, and the university will have to make up the shortfall from investments and business opportunities. RUK students are seen as a way of closing the funding gap. But it may also be that the calibre of those applying to Edinburgh declines. Next year, all of England’s straight-A students are to be removed from caps set by Westminster, and English universities will be “bidding” for them with scholarships and bursaries.

Currently, the prospectus minimum for entry to Edinburgh is three Bs at A-level – at the moment, this kind of offer is only made to students who are from underperforming schools or who are the first in their families to go to university. Most Edinburgh students have straight As. But, next year, offers made to RUK students may be lower than they have been in the past.

One academic, who did not want to be named, says: “One worry is that English universities are going to be offering very attractive bursaries to students who do very well in their exams, so the cream of the crop will have gone. The English students who do apply will be bringing £9,000 of funding with them and we have been told that three Bs is likely to be more of a real bar than it is at the moment.”

Applying to Edinburgh would usually involve an extra year of cost plus the potentially uncomfortable situation of paying for a course that most students get for free.

Edinburgh University’s vice-principal, Professor Nigel Brown, says: “Students and families will have to make their own decisions but we hope the calibre of education we offer will continue to attract the brightest students.” He says the university would never deliberately set different criteria for non-Scottish students – but he admits that differences between the intakes could result as an unintended consequence of the two-tier system.

“We are in uncharted territory. We will be as careful as we can be to ensure that the quality of students we take continues to be at the highest level,” says Brown. It is “highly probable”, he says, that, in 2012, straight As at Scottish higher (equivalent to A-levels) will not be enough to guarantee a place at Edinburgh. “We will have to turn some very good students away.”

The situation is likely be worse than usual because fewer Scots will be applying south of the border due to the fee situation. Brown is “concerned” about a proposal for some of Edinburgh’s funded places to be redistributed towards lower-ranking institutions – to make up for the fact that they simply don’t have the option of attracting RUK students to raise cash. Glasgow and St Andrews are likely to be in a similar situation.

The proposal to lift the cap on RUK student numbers is contained in draft legislation by the Scottish government. This should be submitted for parliamentary approval in the next few weeks.

Sir Andrew Cubie, the author of a seminal report into higher education funding in Scotland, which argued that free higher education was unsustainable, says he is concerned about the Office for Fair Access’s lack of remit in Scotland. “I hope individual institutions will try to maintain the principal of equality of access for students coming from the rest of the UK as well as from Scotland,” he says.

The president of Glasgow University student union, Christopher Sibbald, said: “It seems inequitable that students from Northern Ireland, Wales and England could get places here with lower marks. That will cause a lot of disquiet. At the same time, I feel sorry for them because they will be having to pay these huge tuition fees.”

Edinburgh University student association’s president, Matthew McPherson, said: “We call on the governments at Westminster and Holyrood to fund the education sector in a way which has fairness to access at its heart, not as an afterthought.”

A St Andrews University spokesman said: “We are looking into ways in which we could increase the number of Scottish-domiciled students we accept. I can’t say more than that at the present time.” Glasgow University declined to comment.

A Scottish government spokeswoman said: “It is up to individual universities to manage and set their fee levels for students from the rest of the UK.”