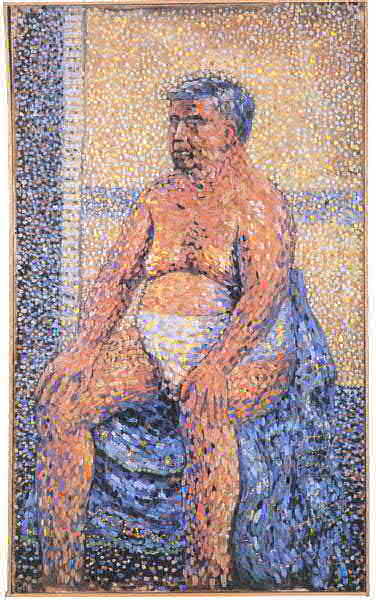 I laughed more in my short visit to the Museum of Bad Art (MOBA) - than I can remember doing at an art gallery. But the experience was not only amusing; it helped me to reflect upon the curatorial process at work in all art galleries, and to reach a conclusion about the Frances Stark retrospective which is currently on show at Boston’s Museum of Fine Art.

The current MOBA exhibition is entitled “doppelhanger” and features portraits which bear an intended or accidental  resemblance to a famous person. My guide, Louise Reilly, pointed to “Sunday on the Pot with George” (above).

“This is one of my all time favorites. Pointillism is difficult. Why would anyone expend that much energy painting a middle-aged man in his tighty whities sitting on a toilet?” And look” she pointed to where the portrait ends, at the subject’s ankles, where either by accident or design the painter has avoided having to include those challenging feet.

MOBA is housed in the basement of an art-deco cinema in Boston, and is free to cinema-goers. Louise met me at the entrance to the Somerville Theatre and – as she doubles as an usher at Fenway Park – she spent the next few minutes acting out for the cinema owner’s benefit, a great run at the stadium the previous weekend. The manoeuvre (whatever it was) shouldn’t have come off but it did.  “When your luck’s in, nothing can go wrong”.

In contrast, the paintings downstairs at MOBA ,which are carefully selected from numerous offerings, all seem touched like the infant sleeping beauty in her cradle, by the malevolent hand of a bad luck fairy. They are all sincere efforts, that at some point must have seemed as if they were going great, but then didn’t. “We look for paintings that have heart and soul, they are authentic but then something has gone wrong”.

Louise, a retired management consultant, has been involved with MOBA for more than 20 years, since its foundation, A friend, antique dealer Scott Wilson came across a painting abandoned in some trash. Louise’ brother Jerry Reilly decided it was too bad to throw away, and named it, presumably in a nod to  “Lucy in the Sky with Diamonds”. “Lucy in the Field with Flowers” 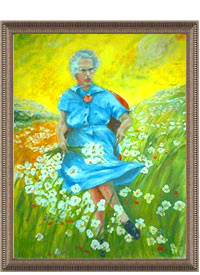 Instead of a housewarming when Jerry moved to a new places in West Roxbury, Louise recalled: “We painted the basement white, put up some track lights and hung an exhibition of bad art”. There were about 20 paintings and by the end of the night the guest list of 50 had become 200 as friends of friends arrived to see the art. Visitors continued to roll up, and after a coach load of seniors arrived from Rhode Island, they decided to move the gallery.

The volunteer staff, of whom Louise is the only original one still involved, provide the witty captions that are part of what makes the exhibition.  The current curator doesn’t in fact like the term bad art but it belongs in the title. Artists generally seem pleased their work is at MOBA and they even sometimes submit it themselves. “We cherish the work, we celebrate it, we love it. “

What does Louise get out of it. “Fun.” But also: “I have learned something quite profound. People say, who are you to say this is bad? And we say: ‘We are the Museum of Bad Art. It’s our curatorial judgement. Who are the Museum of Fine Art to decide what’s good art? It’s their judgement. You are free to disagree with our judgement just as you are free to disagree with theirs.”

And also “I like it or I don’t like it, isn’t the same as, it’s bad or it’s good.” Visiting MOBA encourages people to have opinions and to make their own judgements. When educators contact Louise, arranging school trips to both galleries, she encourages them to do MOBA first for this reason.

There is something important here about the role of the curator, which is usually so invisible. It shines a light onto that hidden process..

A few days earlier, I visited Boston’s august art museum MFA and the current exhibition in the contemporary wing by Frances Stark.

Stark is billed at the entrance as “the poet laureate of the internet”, which had me scratching my head already. Surely, this title is a British thing and refers to Royal appointment. It’s fairly certain that if the Queen were to appoint a laureate of the internet it wouldn’t be Stark. You might need to see the exhibition to understand why her typical question “Have you come far?” would be particularly inappropriate here.

Stark is a 50 year old artist/ writer from LA, some of whose work is about her inability to write. The work leans towards the written word. At one point, I was told off for leaning in too close to read an email that had been printed out and affixed to the gallery wall.

Two of the rooms were rendered attractive by the presence of comfortable grey sofas. One had a soundtrack of Mozart playing – Don Giovanni, intended to underline Stark’s position as an online seducer of young men. She has virtual sex with men on her webcam and the dialogue that she has with them and has preserved flashes up on the wall.

Many of the young men seem to be Italian, easy prey perhaps for her somewhat cheesy chat up lines. In one someone complains that another young man has been chosen to be her assistant. It struck me that if a 50-year-old man were seducing cash-strapped young women it wouldn’t be here.

One dialogue contains a line about how an artist can fart in a coke bottle and that will be art. In another a young man teases “Your Medici (art dealer) will be angry with me. You should be working,” and her faintly chilling reply is: “This is work. For me”.  I thought I detected a faint whiff of cynicism.

A glum-looking woman in a flowery dress wandered into the exhibition with what looked like a bad case of art sadness. Her eyes lit up when she saw the first sofa – she may not understand the art but she could read the meaning of the comfy seat and she flopped down into it. Behind her two children trailed in, a girl of 10 or 11 and an older boy.

An A4 paper sign at the entrance says cryptically: “Not all content may be suitable for all viewers” but there is no obvious age warning.  As the youngsters stood looking at the screen, this one illustrated with a naked playmobile doll, the line flashed up on the screen “You remember Mickey Mouse? I raped him.” The woman shrugged and raised her hand in a helpless gesture. The child eyes widened and she took herself off into the next room.

Context matters. The possibly desperate young Italian who wrote that line in his bedroom in Rome, trying to impress an older woman had no idea it would one day be flashed up on a screen in an art gallery in Boston and be one more nail in the coffin of a little girl’s childhood.

Frances Stark’s work is not uninteresting, It would be great for a pop up show in a squatted warehouse in East Berlin, or perhaps for the Museum of Crude Art, but it is not fine art. That’s my judgement, obviously not shared by the gallery’s curators. But after visiting MOBA, I felt more empowered to make my own call on that.

I think MOBA has something important to teach about issue of curatorial judgement and perhaps too the importance of poking a little fun at it.  Perhaps MOFA could give them some hanging space in a  cafe or something, it would be nice to hear some chuckles of amusement in those stately halls. 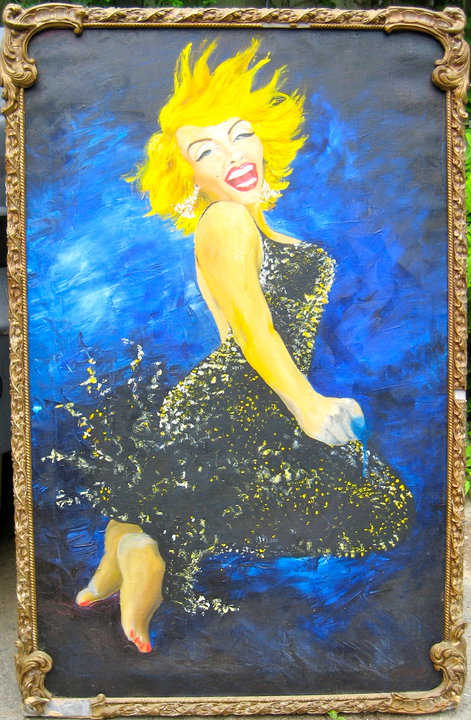 Purchased by M. Frank at at Boston thrift store, June, 2010

“ This portrait of American film icon Marilyn Monroe was clearly inspired by Philippe Halsman’s dynamic “Jumpology” photographs, some of which were featured in Life Magazine and in his Jump Book (1959).

The painter may have sought to improve upon the representation by reversing and intensely colorizing the image. While the repositioning of her feet does not take away from her joyous abandon, it helps portray Miss Monroe as a diminutive yet zaftig ballerina en pointe in mid-pirouette.”