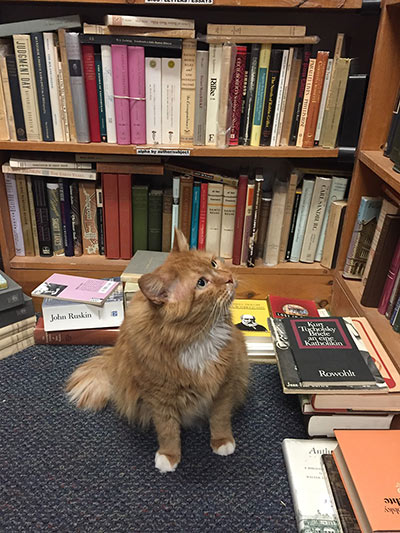 Will bookshops survive the digital revolution? Perhaps some of them may. There is a special pleasure in reading on paper, browsing real books, picking them up and gathering in a moment a sense of their heft and gravitas. This January, among other things, I plan to read more, and to read more weirdly and widely, rambling without the direction or the cognisance of algorithms.

So on a snowy Sunday afternoon shopping for dull household items in Boston’s January sales, my feet turned as they often do towards the alley that houses Commonwealth Books. It’s a fascinating second-hand bookstore which is also the residence of a large ginger cat named Leo. Leo reminds me of a real-life version of the fictional ‘Bagpuss’, a shop-dwelling cloth cat whose magical adventure were narrated by Oliver Postgate on the BBC when I was a child.

This particular afternoon, as usual, Leo was relaxing on a cushioned stool in the centre of the shop, near the gas fire. Next to him was the book in which his admirers write their messages, mostly obsequious remarks about his looks and intelligence. “Leo’s Guest Book ll” “You are the most handsome cat I have ever seen and I work in an animal sanctuary.” Some write wistfully that they would have liked to cuddle him but do not wish to disturb his repose, others sketch him or tell him about themselves.

I spent an agreeable hour or so before the shop closed browsing the shelves. There are racks displaying old maps, showing Boston’s beginnings as an isthmus among shallow channels in a muddy estuary, to the sprawling conurbation it became. There are coloured plates cut from books and magazines and mounted in paper frames.

The book collection is rambling, stretching into corners and behind shelves, from racks of small paperback mysteries with lurid covers to rare editions of Thoreau and Twain. There are mismatched chairs to sit on, soothing music playing and, of course, lots to read.

I found myself in a little nook devoted to biographies and collections of letters, thinking about the effort that went into recording these now forgotten lives. Perhaps it was easier for writers in those pre-internet days. I picked up a few volumes, reading a rather saccharine account by Edith Wharton of her Victorian-era childhood and some pages of Gertrude Stein’s ‘The Autobiography of Alice B Toklas” in a compact, well-preserved paperback edition whose sleevenotes said that Stein wrote the book “largely for her own amusement”.

Another broswer got up from the comfy chair with the leather seat and I moved towards it but was too slow. I sat on the floor and carried on reading, and the shop emptied out. Towards the end of the afternoon, Leo woke up and came right over to me. I felt highly privileged to get the opportunity to tickle him under the chin and to seek his opinion on the book I was reading. He sat and swished his tail for a moment before stalking along the bookshelves peering closely into them, rather giving the appearance of a frustrated reader searching for a missing volume.

The shop closed. I made a random selection, spent a few dollars, and then stepped outside in the January dark, past the red snow shovel leaning by the door and a manual typewriter in the window with an advert for the shop protruding from it. As I stood outside, putting on my hat and gloves and looking into the shop, the sales assistant clicked out the light. A young couple arrived at that moment, arm in arm, disappointed to have missed it. 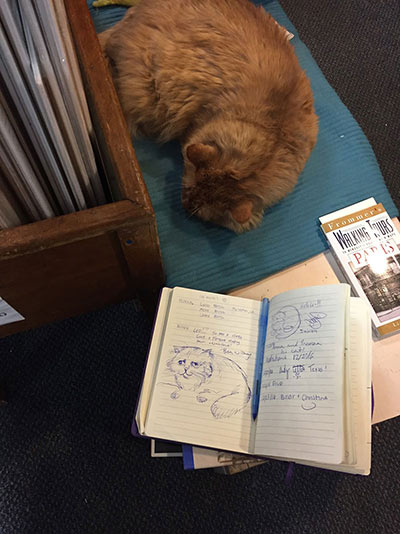 Leo with his guest book.