There is a point in Mairi Campbell’s one-woman coming of age show Pulse where in an attempt to convey inarticulable emotion she writhes on the ground speaking gibberish. As she plays wild notes on her viola, animated scribbles light up the backdrop. Struggling with unrequited love for a priest, travelling alone in Mexico, in a culture she doesn’t understand, she has lost her way. 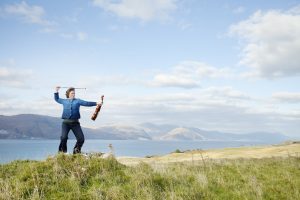 The crisis is powerfully embodied by Mairi on stage and I was not the only audience member who saw the show in Massachusetts’ Shea Theater this week who was moved to tears.There was laughter too, as she enacts various characters she meets on a journey that brings her home to Scotland, changed.

A theme is Mairi finding her own rhythm, and creating harmony. “The bossy bow” looks as if it is making everything happen – but in order to make the music sing, it has to follow the left side, which is quiet and strong. Mairi has to reconcile different traditions, as well as the desire to innovate and the desire to hold on to the past. This is she says, like dancing: “one foot on the ground, one in the air.”

This journey is not over and Pulse is part of it – brought to Massachusetts by Northampton’s Serious Play Theatre Ensemble/Sheryl Stoodley after a connection made at the Edinburgh Fringe. Mairi and I are friends, and since its first performance two years ago, I have seen her developing as a stage performer, making an emotional connection with the audience  – “she makes it very easy to be up there with her,” as someone commented at Shea, a recently renovated 300-seat theater in Turner Falls.

At the finale of the show as Mairi stands, bow and viola in hand, a huge shadow rises behind her, a symbol of the powerful and strong woman she has become, who has not so much found a place in the world as made one.

Mairi Campbell is in Boston for the month of December, where she is starring in WGBH annual “Celtic Christmas Sojourn” at the Cutler Majestic Theater.