Boston, March 24. Her voice breaking and shaking with anger, a survivor of the massacre at Florida’s Marjory Stoneman Douglas High School addressed the crowd on Boston Common; “We are not special, we are not particularly articulate”. Leonor Munoz’ message was that she was an ordinary teenager at an ordinary school on an ordinary day and that what happened to her could happen in any high school on any main street in any town in America. The fun and anticipation of a teenage Valentine’s Day - she said a little about that - ended when she went outside in response to a fire alarm to be told “Code Red: Run”. Leonor’s older sister Beca, a student at Northeastern University spoke too - she received a text from her sister that day saying “Active Shooter on Campus - Do Not Call”. For the crowd of thousands on a grey end-of-winter afternoon clustered around the Common, straining to hear the speeches, that is the text, as one mother’s handmade sign said, that nobody ever wants to receive. Everyone can relate to what is becoming an all-too-ordinary story. Teacher and former Marine Graciela Mohamedi told the crowd: “The opposition will call you snowflakes. But do you know what in Massachusetts we call thousands upon thousands of snowflakes rising on a wind of change? We call that a blizzard!’ 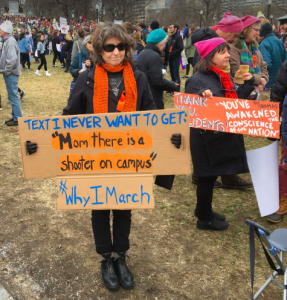 A young man gave a speech about the suicide of a family friend – more than 60% of gun deaths in the US are suicides –  and asked for support for two laws in progress in Massachusetts, one a voluntary code people can sign up to so that they bar themselves from buying guns “on their bad days”. His friend would have signed this, he said. And another is the kind of “red flag” law that would have allowed authorities in Florida to remove guns from the clearly troubled teen who committed the atrocity at Stoneman Douglas.

It was a very peaceful protest. I joined the march at Roxbury Community College, from a subway train packed with protesters carrying a multitude of handmade signs. It felt huge, largely filling the streets we walked down and snaking back and forward to the horizon. There were no police or stewards, just a helicopter, very high in the sky above. There were a few police on the Common, mostly using black pushbikes. They formed a cordon round a small counter-demonstration at the State House, pushbikes to the fore, where they perhaps provide an extra layer of low-vis protection.

There were lots of individual signs. “Military Assault Weapons are Legal? You’re Kidding Me.”; “My OUTRAGE won’t fit on a SIGN”, “The only arms that will be in my classroom” – with a picture of children’s raised hands; an older man with a placard bearing the Dylan lyric; “”How many deaths will it take til we know that too many people have died’. I saw a couple with matching signs – hers painted, his scrawled in marker pen “Guns Don’t Kill People? Um, Yes They Do.” One man had a large sign that read simply “So Proud of You Kids”; and one tall young man carried a Stars and Stripes which he waved above the crowd. 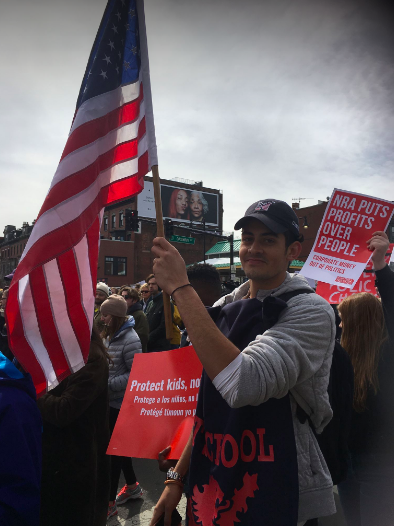