We hosted Mathias Lyamunda, the chief executive of an NGO in Tanzania, as part of the HomeStay network for COP26. This gave us a glimpse of an African perspective on the climate change conference. Africans feel they are being told they can’t have affordable electricity – there is no capacity for them to have that; because of what the rich world has already taken from the earth. 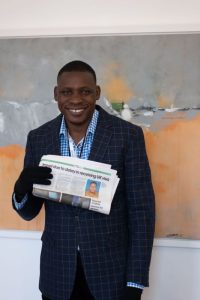 There is a climate debt – but the developed world created it. Over dinner, Mathias told us that the UK emits more C02 than Africa. We thought initially that he meant over time but he said he thought it was each year. This seemed startling and my husband Rob immediately turned to Google for clarification.  The worldometer says that per capita Tanzanians emit 0.18 tonnes of carbon per year, compared to the UK’s 5.55 tonnes. Africa has a population of 1.2 billion against the UK’s 66 million so if Tanzania were average, the continent would produce about half what we do per year.

In fact, South Africa is an outlier, a big fossil fuel burner emitting almost the same C02 as the UK. But it seems that sub-Saharan Africa, excluding South Africa, emits perhaps half of what the UK does, although it has a population of roughly one billion people. That also doesn’t take into account the hundreds of years that the UK and other developed nations have been belching out fumes while they built their economies.

For most sub-Saharan Africans, electricity from the grid is out of reach. Even in Dar es Salaam, a big city of six million people, most can only afford to use it for lighting. They can go to the market to buy gas bottles for cooking – also becoming scarce and expensive – or they can use charcoal. This demand for charcoal is devastating the countryside.

For us, power is a given. As we ate food cooked in an electric oven, Mathias told us about the primary school he attended as a child – he is now almost 40. The ground around it is bare and food is scarce. Many children go to school hungry and stay hungry all day because Tanzanian schools don’t provide food. Other problems such as child labour in mines result largely from food and fuel poverty.

In the last decades, Mathias explained, many trees have been cut down for people to sell charcoal for money to buy food, or to create clearings to farm crops. But now there is too little rain for crops to grow – partly because the loss of trees reduces precipitation.

I didn’t know this. “The trees bring water to the sky,” Mathias said, fresh from training on explaining climate issues in relatable ways. “The trees are intelligent, they move water around as it is needed,” my daughter tried. This puzzled me – the  last time I studied precipitation, I was looking over a child’s shoulder at P6 geography homework and I was sure that wasn’t in the graphic. But I checked and it seems that there is now evidence that trees effectively make rain.

I found some educational material online quoting from peer-reviewed research in Nature and the Scientific American:

“Large-scale deforestation reduces rainfall in some areas by up to 30%, and reliable rainfall in continental interiors of Africa, Australia and elsewhere, appears to depend on maintaining relatively intact and continuous forest cover from the coast.[6]

“Transforming landscapes from forest to fields has at least as big an impact on regional climates as climate change.[7] Tanzania has the fastest rate of deforestation in the world, mostly due to charcoal production – it lost 20% of its forest in just ten years. Like everything else, climate issues are complex. They don’t fit neatly into a slogan or a 30-second news bulletin. Some of Tanzanian’s increasing food scarcity is caused not directly by the climate emergency but because of deforestation borne out of the need for power. In turn, this deforestation releases CO2. But creating a renewable energy infrastructure to the extent that could make it an alternative power source to charcoal would require a huge investment from the developed world.

Sub-Saharan Africans want to be able to live and to develop their economies. Many African countries do have large fossil fuel reserves. The New York Times reported that proven crude oil reserves on the African continent total more than one hundred billion barrels. The region is rich in gas, too. Mathias and the African delegation at this COP were for the first time arguing for a slower transition for Africa – for them burning fossil fuel could be the least worst option.

Are we in the developed world prepared to accept that it would be fair for Africa’s C02 emissions to rise even as ours fall? Or are we prepared to fund a transfer of resources to enable solar, tidal, wind and so on, to supply their needs? At the end of COP26, more money was promised – but it fell far short of what African negotiators wanted.

Former President Barack Obama on his visit to COP26 said: “When it comes to climate change, “all of us have a part to play, all of us have work to do, all of us have sacrifices to make”. Africans argue that they are expected to make an extra sacrifice – to forgo amenities that others take for granted, to pay a debt they didn’t create.