Glasgow’s Barras celebrated its centenary on Saturday. A combination of rain and Covid warnings meant the place was quiet despite the anniversary. Christmas lights were refracted in the puddles outside the long, low, green sheds, painted with faded letters reading: “World Famous Market”. 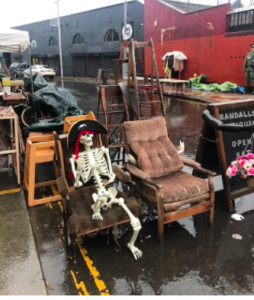 A woman was giving a tour – telling a knot of bystanders about the great days of the market, the legendary Christmas Eves, when it stayed open until midnight. Just before it closed, everything that hadn’t been sold would go for pennies and the family who ran the place – fruit dealers – would hand out free fruit. Many a struggling Glaswegian parent would creep in with oranges and a few toys for the weans’ stockings in the early hours from the Barras.

Fishwife Margaret Russell and her husband James McIver built up a thriving fruit business dealing from barras in the early part of last century. But police started to move pedlars and hawkers on and in response, the couple bought some land to create an open market. A few years later, in 1930, Margaret was left a widow with nine children. She persevered and in 1934 opened the Barrowland Ballroom, where East Enders and traders could socialise in glittering splendour.

Street traders of all kinds flourished – the place was famous for the banter and the bargaining. Many characters passed through – my uncle David Kemp who has been going there for 30 years, remembers seeing John Bercow with his bulldog Spike canvassing there circa 1987 when he stood (unsuccessfully) for the Conservatives in Motherwell. One trader of that era had a sign that read “As advertised on Crimewatch UK”.

The police long ago clamped down on the knock-off designer bags and fake jewelry that were popular in those days. There are stalls selling new toys in cellophane, racks of children’s bikes, other popular gifts. But the market specializes now in what in Scots would be called whigmaleerie. Wally dugs, ashets, an admix of knick-knacks and buried treasures.

David, who has an interest in pottery spotted some pieces by Clarice Cliff. A classic willow pattern ashet, going for £20, was displayed in front of an enormous velociraptor modelling a leather saddle and a tartan blanket. “It is the sort of thing you regret not buying,” he said wistfully as we moved on, referring to the plate, not the dinosaur.

The first hall we entered smelled tantalisngly of bacon – an antique seller surrounded by his wares was deftly frying a couple of rashers on a camping stove. A sign on a nearby stand read: “Cash. Yer at the Barras”. I bought a small dish with Mandarin letters on the base that could have come from either a Sinologist’s house clearing or Paddy’s Chinese supermarket, a copper kettle that leaks, and an antique Celtic brooch.

We chatted to stallholder Rosemarie who grew up in Germany, but moved to Scotland in 1955. She started her stall, mainly of pottery, when she was 71 – now she is 91 but still going, enjoying the company and the interest.  Another stallholder, selling costume jewelry for a pound or two,  bemoaned the cold, opening her hands to show fingers white at the tips, from hours standing still in the unheated sheds. 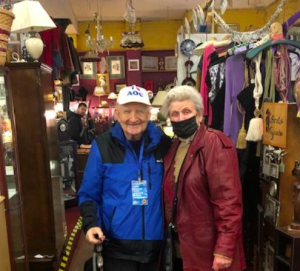 One acquaintance we chatted to seemed to say he felt the area was suffering from a form of gentrification, as some of his favourite pubs have been closed down. There wasn’t much sign of that as we left the area – two men were sitting in the bus shelter opposite the Saracen Head pub, one shaking painfully in what looked like a miserable result of drug addiction.

The Barras is a historic spot. But could it benefit, if not from gentrification, from some fresh blood – perhaps the kind of vintage clothing and upcycling operation which seems to bring the young and the tourists to Brick Lane or Portobello Road in London?

Seeing the man in the bus shelter reminded me that I read in the New York Times this week that after using chemical weapons on his own people, Bashir Assad is busy turning Syria into a narco-state whose biggest export is synthetic drugs such as amphetamines – so there may be more of that misery headed our way.