Louise Richardson, the new head of St Andrews, will bring 'American attitudes' to admissions and to red tape, she tells Jackie Kemp. 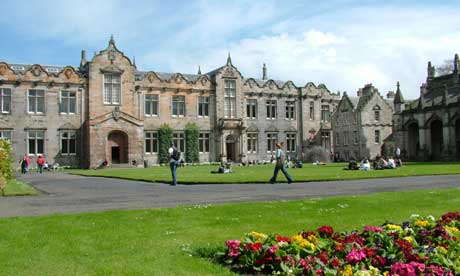 St Andrews University ... Louise Richardson was previously the dean of a Harvard college

Louise Richardson, the new head of St Andrews, will bring ‘American attitudes’ to admissions and to red tape, she tells Jackie Kemp.

A 10-minute walk from the back door of the principal’s office at St Andrews University takes you past the ruins of a 12th-century cathedral down to a wide and empty seascape. On the cobbled harbour wall a group of ecology students, sensibly attired in woolly hats despite the bright sunshine, are lowering scaffolding poles into the water for an acoustic experiment. It is a good day for it. Apart from the occasional mewing of the gulls, there is almost no sound at all in this very quiet corner of Scotland.

Despite the beauty of the scene, the new principal, ex-Harvard academic Dr Louise Richardson, never walks this way. Hard at work, as she has been every waking moment since her arrival at the turn of the year, she has not yet found time for a stroll. Richardson, whose official biography lists her core skill as “leading organisational change” – business-speak for kicking ass – is doing her homework.

Around her the auld gray toon – at almost 600 one of Europe’s oldest universities – silently awaits the touch of a transatlantic, female toe. Perhaps surprisingly, this bulwark of tradition will become one of the first of the seven ancient universities of Britain and Ireland, in a formal ceremony to take place on 25 March, to install a woman as principal. Or as the local golf club, the Royal and Ancient, would put it, a lady. Ladies are not allowed to join and, unlike her predecessors, Richardson has not been invited to enjoy honorary membership of the home of golf.

Richardson’s normally charming manner faintly frosts over when she is asked about this cold, Fife-style welcome. She is Maureen O’Hara channelling Miss Jean Brodie. “I haven’t had time to go to the gym since I got here, so the idea that I would have three hours to play a game of golf is…” she smiles scornfully, indicating just how ridiculous a notion this is, “unrealistic.”

No, she doesn’t go for walks or relax in any way that she can think of, although she does admit that at some point, “that will have to stop”. Richardson is working “round the clock” in a way that might be described as puritanical – although that may seem an odd label for an auburn-haired Irishwoman who was educated at the Ursuline Convent in Waterford.

However, one senses that getting her head down and getting on with her work is a default setting for this 50-year-old best-selling author, professor, international authority on terrorism, ex-dean of a Harvard college and mother-of-three.

The first of her family to go to university, Richardson showed her colours early when she decided to apply to Trinity College Dublin as an undergraduate, despite the fact that it was regarded as a Protestant institution where there was hostility to Catholics. “It had an international reputation. It was regarded as being the best and I was very ambitious,” she says.

Surprisingly, Richardson managed to garner only a 2:1 in history and political science, a fact that she puts down to her decision to take a year out.

“I read an ad in the Irish Times for a rotary fellowship. It would allow you to spend a year in any country in the world. Trinity wouldn’t recognise it, so I had to take a year out and when I came back I had to take the same exams as the others. I didn’t get any credits but it was the most extraordinary experience. The year was 1977, and I went to the University of California [Los Angeles]. It was quite new, it was near the beach. It was a totally liberating experience. I took a course in Zen socialism.

“The first time I went into class there was a man sitting on a table top in a yoga pose. He said, ‘Hello I’m Jeremy’ and I thought ‘I don’t care who you are, there will be a professor here in a minute’. You’ve guessed it, he was the professor. It could not have been more different from Trinity, where my teachers still wore robes.

“At the end of that year I spent three months going by bus from south California to New York, stopping to give talks to the local rotary club. It was a wonderful trip. I talked about the Northern Ireland situation, and I talked about myself and what I had done with the scholarship they had given me.”

Having fallen in love with America, Richardson returned as soon as she graduated and had been at Harvard ever since, until this move. There she drew on her early experience in the white-hot hatreds of 1970s Ireland to become an international expert on understanding terrorists. She writes in her seminal book on this subject, What Terrorists Want, that she would have joined the IRA “in a heartbeat” aged 14 and that her mother locked the headstrong teenager in her room to stop her joining a protest march a week after Bloody Sunday in 1972.

As well as pursuing her own research, Richardson rose to become executive dean of Harvard’s Radcliffe College, a post she held for seven years, leading the team that successfully transformed it from a famous women’s college into a mixed institute for advanced study.

Headhunters searching for the right candidate for the St Andrews job struck lucky the day they called Richardson. She has received many such calls over the years, but she put them on hold. This one just happened to hit her at the right time – her youngest child, Rory, was 14 and about to move into high school and exams. It was a question of making a new career move now or waiting four years. Rory has now been sent to a boarding school in rural Perthshire – “because I am working round the clock. Everyone has been very kind to him but it is a difficult transition because he is coming from a big urban school.”

Ironically, her middle child, Fiona, has heard only recently that she had been awarded a place at St Andrews. “She is interested in ecology and she applied here because of that,” says Richardson. “She didn’t use my name, and when she applied we didn’t know I was going to get this job. I don’t think she will come here now. I was teaching at Harvard while my eldest daughter, Ciara, was a student there and that was a hugely positive experience for both of us. I certainly benefited from getting her perspective as a student. But I think it is different if your parent is the principal.”

Her husband, Thomas Jervon, a doctor, whom she thanks in the preface to her book for his “unfailing willingness cheerfully to pick up the pieces on the home front”, remains in the US, waiting for Fiona to finish high school.

Richardson is open about the fact that this move is a tough call for all of them. “It is hard. I had a fabulous job and a fabulous life, and I am very conscious of the disruption I am causing to my family.”

What she is setting out to do in this transition period is to bring her “American attitudes to life: open, energetic, interested in process” to St Andrews.

Richardson has big plans for fundraising privately, centred around the university’s 600th anniversary, which occurs between 2011 and 2013, which she sees as key to competing in a global market. She also wants to maintain and build on the university’s strong global brand, which attracts a very cosmopolitan student body – something she sees as a “huge achievement given our location”.

Her predecessor, Brian Lang, was not politically popular for many reasons – an out-of-court settlement for a sexual harassment case and his assertion that St Andrews’s much higher rank than either Edinburgh or Glasgow in national rankings was down to his refusal to “widen access”. Or, as he saw it, discriminate against students from private schools. The percentage of state school pupils fell from 62% in 2003 to 59% in 2007.

Richardson’s views are more in tune with the Scottish consensus. “It seems to me that if someone comes from a background where there are no books in the house and they achieve a degree of academic excellence comparable to my children, who grew up with professional parents, surrounded by books, then the potential of that person to succeed academically might be even greater,” she says. “You have to look at the context in which the academic success was achieved.”

However, although most questions are easily putted away, Richardson occasionally gets out a heavier club. She looks over at the press officer before embarking on an apparently unscheduled controversial answer.

“The biggest surprise for me is that I have found the university much more bureaucratic than I am used to. Of course I fully expected to be held accountable, as 30% of our funding comes from the government, but there are layers and layers of accountability. I worry that we spend so much of our time on process here that we are eating into valuable time for teaching and research.”

The new principal of St Andrews, trim in a dark suit, sits straight-backed in her chair, legs crossed, moving a foot in its elegant black court shoe. Outside, a faint breeze stirs the neat flowerbeds of the university courtyards, perhaps a precursor of the winds of organisational change to come.