Buckets and spades for their weekly beach trip, a firepit in the garden for making toast, and a mirrored dance floor. The nursery at Whitley Bay’s Rockcliffe school was described as “magical” at the North-East Teaching Awards finals last week.

Primary teacher of the year Lindsay Ford was inspired by a trip to Denmark’s forest schools to introduce fire to three-and four-year-olds. “Initially, some of them have an unnatural terror of it … But what we notice is the patience it brings out in them. They will sit round it for ages, waiting for it to light and for the flames to die down so we can cook.” 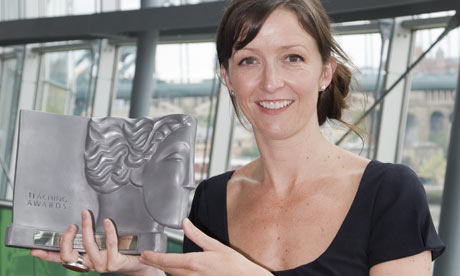 Lindsay Ford, who introduces three-year-olds to fire – it brings out the patience in them. Photograph: Carmel King

The art room at Southmoor community school in Sunderland is “an Aladdin’s cave of delights. The moment you walk through the door you know you are somewhere really special,” presenter Wendy Gibson told the audience at the ceremony at The Sage in Gateshead.

Secondary school teacher of the year Arthur Ball is passionate about his subject. “Art is the most important thing in the world … You could get rid of every other subject and just teach art. It is about problem solving and hypothesising. A painting is just the culmination of millions of small decisions and risks and millions of mistakes.”

A few of the 30 finalists brought children. Anna, 10, in a pink party dress, was there, proudly supporting both her excited grandmother, teaching assistant Mary Garthwaite, who felt the ceremony was “like the Oscars”, and her teacher, Fiona Westerman, who got distinctions for their work at St Godrics RC primary in Co Durham. Louise Hamilton, of Teesdale School in Co Durham, who is now training as a teacher, was the winner of the teaching assistant category.

Another with two awards was special school Abbey Hill Technical College in Stockton-on-Tees. Head Mike Vening won the Ted Wragg award for lifetime achievement. The judges commented on his success in building links with employers.

Kathryn Lindop, teaching science there, was outstanding new teacher of the year. When she found out that some of her students had almost no speech, she learned to sign. “I have tremendous students, full of character … It’s fun going to work every day,” she said.

Another special school, Dene, in Sunderland, was recognised when head Graeme Shillinglaw won the RAF secondary head of the year award, for the atmosphere of “calm and respect” he creates.

David Jackson, of St Peter’s CE primary in Redcar, was governor of the year for his “passion for the school”.

Also in Redcar, Bydales school, with its wind turbine on the roof, solar panels and carbon footprint calculator, won the sustainable schools award.

Primary head of the year June Foster is “the dynamo that drives us all” at Moorside community school in Newcastle. She said: “I like to think we can offer support to children who may not be quite as cherished at home.”