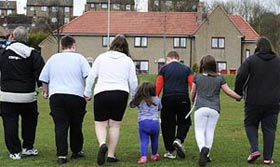 The pregnant mother of two children, aged 3 and 4, taken into care because they were judged to be overweight spoke yesterday of her anguish at the decision.

“And I have to cuddle them and say, ‘You can’t come home with Mummy now. But soon, darlings, we’ll get you home soon’. I just have to be strong for them, to help them. But the truth is, I don’t know when I will get them home. Or if.”

The lawyers representing the Dundee family of eight, who cannot be named for legal reasons, is to challenge the controversial decision by the city’s social services department to remove the two children last week after concerns that they were beginning to become dangerously fat. They will attend a closed hearing before a Sheriff on September 30.

Katie Price, the family’s solicitor, said that the parents were distraught when social workers removed their two youngest children on a surprise visit, and will argue that the children should be returned.

“Normally I am matter of fact with my clients but I am really angry about this,” she said yesterday. “They are a nice family, they come in here with all the children immaculate and the children are hanging off their Mum and Dad. They don’t drink, they don’t smoke, they love their kids.”

The family’s problems came to light when the media revealed that their eldest son, aged 12, weighed 16st and another child, aged 3, weighed 4st. The family had gone to the council to seek help for the eldest child and the council had drawn up a care package, when the story was leaked.

Ms Price said that social workers acted after a series of small incidents, including one where care workers judged that the mother could not move quickly enough to takeyoungest child down from a window-sill, despite the window being closed. “I have an 11-year-old who is quite stout and I am worried. Where will it end? Are they going to take my son off me?” she said.

The children’s mother, who is due to give birth within weeks, said: “I find out at the end of the month whether they are coming home or not. It’s a very scary position to be in. I feel helpless. I feel like the social work department holds all the cards. But they are my children and I love them and I am not letting them go without a fight.”

The children’s father said: “Our children mean everything to us. We have been married for 16 years. We don’t go out, we spend all the money we have on the children. They have taken our two youngest and we miss them so much. My wife is really struggling with the stress. She is pregnant and the baby is breach. We just want the family to be together again and for them to leave us alone.”

A Dundee City Council spokesman said: “We will not comment in detail on any family who are being supported by the council but we will state, in general terms, that children would not be removed from a family environment just because of a weight issue.”

Neighbours of the family in Dundee’s Kirkton area, known locally as “The Reservation”, were outraged by the council’s actions. Parents picking up children from a dance class at the community centre, which two of the family’s children attended, expressed shock. “I would have said the children were quite big and the mum was hefty, but it is not against the law to be big. There are plenty of people who work for the council who are fat,” a grandmother said.