Agnes Houston, nurse-manager of a busy chiropractor’s clinic, lynchpin of her family and carer for her ailing father, thought of herself as the strong person, the one who organised others. Until things started to go wrong. 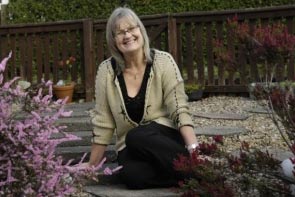 Others noticed changes before she did. Having meals with her family she would point to the salt and click her fingers because she couldn’t remember what it was called.

She had to get up earlier and earlier to get herself organised and ready for work. Her writing was becoming illegible. Her speech was sometimes slurred.

Eventually her boss took her aside and asked her to seek help. Was she suffering from depression or stress?

Instead, tests found that Agnes, then just 57, was suffering from early-onset dementia.

Diagnosis was a catastrophe for Agnes. She fell into a ‘black hole’.

“My life had fallen apart. Just like Humpty Dumpty. I’d fallen off the wall. But who was going to put me together again?”

She felt for a time as if she, her relationships, her life were ‘disintegrating’. A friend said: “At that time, Agnes was with us in body only – her spirit was broken, her eyes full of tears yet she was in constant denial for some months. Eventually, after great anguish – relief. At least she knew now she was not mad.”

After struggling initially, Agnes, from Coatbridge, joined a national support group and was offered counselling.

But Agnes is still an articulate and intelligent woman, who now, three years on, has come to terms with her illness and has found an active and useful role campaigning to improve awareness of the condition.

She argues that with the potential for early diagnosis comes a responsibility for medical staff to support patients through the difficult emotions of facing this degenerative condition which has no cure and little effective treatment.

Agnes learned of her diagnosis from a consultant at a psychiatric clinic and was then left to get on with it, she says.

She adds: “It is inhuman to diagnose someone with dementia and not support everyone involved with them emotionally.”

Alzheimer’s Scotland’s charter for patient rights launched at the Scottish Parliament this week says that Agnes’ experience of being diagnosed and then left alone to deal with it was wrong and that early support is crucial to good management of the disease.