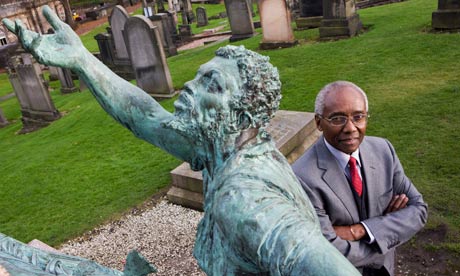 Professor Geoff Palmer: ‘I couldn’t refuse my OBE. I felt it was not only for me, but for all the people who helped me on the way up’. Photograph: Murdo Macleod

‘The day I was offered a Chair, I phoned my mum in London and she said in her strong Jamaican accent: ‘What are they giving you a Chair for? Tell them to give you money.’

This memory of his mother’s joke produces a warm laugh from Geoff Palmer, professor emeritus of brewing, as we sit in the kitchen of the neat family home in the Scottish countryside he shares with his wife of 40 years, educational psychologist Margaret Palmer.

The kitchen worktop is festooned with test tubes and the dining-room table is entirely covered with books and papers as Palmer – perhaps Britain’s foremost African-Caribbean scientist – ponders an accurate test for grain spoiled by rain.

It seems unlikely that this is the same man whose report from chemistry at school read: “doesn’t really care”.

Surveying the scene, Palmer, who is working with Benjamin Zephaniah on a project to encourage African-Caribbean children to pursue science careers, points out that it was much easier for his own children, who grew up surrounded by books, to succeed at school than it was for him or others like him.

“If I were Asian, it would not be unusual that I became a scientist and I would not be doing race-relations work.” But many African-Caribbeans are still relatively poor and, coupled with all the problems of deprivation, he argues that they can suffer from cultural isolation and “negative peer pressure”. As part of his work on trying to open doors for young black children, Palmer is patron of the Ishango Science Club for African-Caribbean children in Birmingham. He is also making a film with Zephaniah for the Open University to be shown to black students.

Palmer argues that, like other poor children, African-Caribbeans have to be encouraged into science. “African-Caribbean children and students are more aware of the financial rewards of sports, music and the media than they are of the benefits of science. When I was asked how much I earned as a researcher by a group of black children, they laughed when I told them. One boy said: ‘Rio Ferdinand could earn your annual salary in a day!'”

Palmer pointed out that, although he may not be a wealthy man, his long career in science has brought him respect, and indeed, the walls of his modest home at the rural edge of the Scottish village of Penicuik are adorned with a number of awards and plaques – including an American Distinguished Research Award, which he was the first European to win, and a picture of himself posing with his family outside Buckingham Palace, where he received an OBE.

“Benjamin Zephaniah refused his OBE, but I couldn’t refuse mine. I felt it was not only for me, but for my mother, my family and for the other people who helped me on the way up.”

Palmer felt that he escaped negative peer pressure and cultural stereotypes. “I was a blank sheet when I arrived in north London in 1955 to share a room with my mother, whom I had not seen since she left Jamaica when I was eight. I had a strong traditional black religious Jamaican family-orientated background. I was outside the new young black British culture of cultural isolation, drugs, music and the dole.

“My mother and my aunts were my role models. They gave me my values. The negative influence of peer group pressure reinforces cultural isolation and promotes failure. This still applies today.”

Palmer grew up without a male role model. “My father got up one day and left, when I was seven years old. I was glad, because he used to push me around and he pushed my mum around.”

When Palmer arrived in London – aged 14 years and 11 months – after his mother saved his fare out of her wages as a seamstress, she was taking him to start work the next day as a grocer’s boy when she was stopped by an education inspector who told her the boy must attend school.

The only real education he’d had until then had been at Sunday school – “the first prize I ever won was for regular attendance” – and although he had an encyclopaedic knowledge of scripture, he had no other education.

He was classed as “educationally subnormal” and offered a place at a secondary modern in Shelborne Road. There he was discovered to be an excellent cricketer and was soon playing against Eton. He was snapped up by Highbury grammar – “they needed me” – and there followed a challenging period for him where “I just tried to look as intelligent as possible and hide how much I didn’t know”.

“I used to go to Islington Library – it was warm and it was free, you could stay there all day.” He took on two paper rounds to help his mother and stayed at school.

He has fond memories of an English teacher. “Mr Ward used to tell us stories from Steinbeck and Hemingway. It took me a long time to realise that the story I knew as Pip and the Convict was Great Expectations.”

He managed to achieve one A-level – in biology. “Those two subjects have been the basis for the rest of my life. Because I understood stories, I understood how people would behave.”

He got a job as a junior lab assistant, attended a local polytechnic one day a week and eventually gained a degree in botany. Then, Palmer found himself a job bashing spuds in Beale’s, a London restaurant.

“When the chef wanted ‘new potatoes’ you had to find the smallest spuds for him. I found another way. I would cut a big potato into four and round the pieces off in the abrader. The chef said ‘you have the greatest facility for finding new potatoes of anyone who has ever worked here’. I got promoted for that.”

In that period, he applied for an MSc at Nottingham and went to an interview where Keith Joseph, a guru of Margaret Thatcher, was on the panel. “He asked me why I didn’t go home and grow bananas.

“I said: ‘There aren’t any bananas in London.’ Because I answered him back, he became quite angry.” Joseph then asked how Palmer would tell wheat from barley from the window of a moving train.

“That was an inappropriate question. That isn’t the kind of thing that you study on a botany degree.” Palmer was stumped, and soon found himself back at the restaurant. Now, however, as one of the world’s greatest authorities on cereal crops, the professor says: “I think of him when I pass a field at 125mph and I can tell the difference.”

Undaunted, he applied for a PhD at Heriot-Watt University. He says: “I don’t know if I was the best-qualified candidate. I suspect not. But I know that Professor Anna MacLeod asked my referees about my background.

“She took the view that, given where I had come from, I would be likely to succeed.”

Professor MacLeod was right. Soon Palmer was embroiled in a controversy in which he overturned the received wisdom about where the enzymes come from when grain ferments – he also found that using a machine similar to the spudbasher at Beale’s hastened the process.

His research into brewing with an African grain called sorghum helped to encourage multinationals such as Heineken and Guinness to use it in their African breweries.

Now updating his seminal cereal text book, Palmer is sceptical about the value of gene manipulation. “The truth is that all living material, including plants, has enough variability in its genes to produce all the variation I think we will ever need, because of sexual reproduction.”

This is something he comments on from within his own experience. “If you saw me walking down the street with my grandson, you would have no idea that we were related – and that is within two generations.”

He has tried for many years to raise the profile of Scotland’s role in the West Indian slave trade. His mother had Scottish connections and, he says, “if you look at the Jamaican telephone directory, 60% of the names are Scottish”.

Over the years, he feels he has got better at dealing with racist slights he puts down to ignorance. Once when he visited the Lothian Police headquarters in Edinburgh, a senior police officer phoned down to reception to find out why Professor Palmer was so uncharacteristically late, only to be told: “No, there is no professor here, there is just a black man hanging around.” It is typical of the professor that recounting this story prompts not anger, but another amused laugh.