"One more pupil please!" reads the appeal sent out by Rebecca Ridgway, desperate to find a young family prepared to move to one of the emptiest places in Europe to stop the school roll falling below 20 at her children's primary.

Ridgway – who runs the adventure holiday company founded by her father, the yachtsman John Ridgway – takes her two children, Hughie, eight, and Molly, 10, to school each morning in an open boat with an outboard motor from their home in Ardmore, in Sutherland. 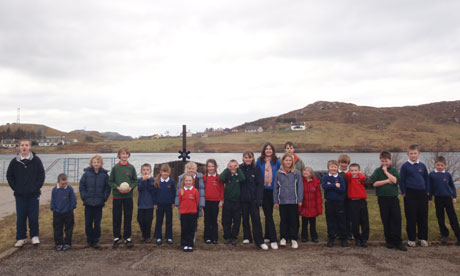 “It is great on a nice day, but not so much fun when there is a howling wind.” Once on dry land, the children take a school bus to Kinlochbervie primary.

Fifteen years ago, there were 57 pupils. But the fishing industry has declined and, like many rural villages, the picturesque little port has a second-home problem.

The falling rolls problem now threatens what the headteacher, Jill Bruce, describes as: “Fantastic educational facilities. We are right on the edge of the loch. Everyone who sees the place is wowed. There is just one problem – not enough pupils.”

This coming year, the primary roll falls to 19, one below the magic number of 20 that guarantees two teachers. Rebecca is concerned about the impact on the children of being taught all in one room with tinies. “That will be really difficult, and the older children may not be pushed as much as they would otherwise.”

The fact that no children are arriving in primary one this autumn also poses a threat to the fully staffed secondary on the site, currently employing 14 teachers for 65 children. “If the numbers continue to fall, that must affect the high school down the line.” The secondary was opened 14 years ago. Prior to that, children had to board at hostels many miles from home after age 11, which parents would hate to see again.

However, Mervyn Benford of the National Association of Small Schools, criticises the Highland Council threat to cut a teacher and damage the education of the remaining 19 pupils based on an “arbitrary” number.

He says that across the UK, rural schools were getting squeezed. “The evidence is that small schools do a really good job. Councils just divide the running costs of the school by the number of pupils and say that’s too expensive.”

But he says they failed to take into account the real costs of big urban schools, with truancy and other social problems. “Big schools spend a lot of extra money on doing things like reaching out to parents that small schools do anyway. ” He says the pupil premium in England will create an even greater disparity.

Although in 2009 the number of rural school closures in England and Wales had fallen to less than 12 a year, Benford predicts that will rise. “Many councils in England are looking at closing small schools.”

In Scotland, the picture is similar, with strapped councils looking for cuts. Argyll and Bute last year threatened 26 small schools with closure.

Parents at Lochdonhead on Mull, whose campaign was featured in Education Guardian last year, are among those who have fended off closure. Among their efforts was a successful campaign for a 16-home affordable housing development they hope will make the school more sustainable.

At Ulva, a tiny community also on Mull that boasts spectacular scenery, parents have come up with an even more innovative solution.

Parents at the eight-pupil primary were “terrified” by the thought of a 20-mile round trip on icy roads in winter and the hole the school would leave if closed. They decided to found a community housing association. Caroline Charington says: “This is a great place to have a holiday home or to retire to, and that pushes the prices up. There just aren’t places round here that young families can afford. We aren’t looking for a short-term fix. We are working on a 20-year plan for our community.”

They may have their work cut out. Kinlochbervie is seven hours’ drive from Glasgow and, with an average population of one person per square kilometre, Sutherland is a wild and lonely place.

However, it is close to the magnificent beach of Sandwood Bay and also to the famous mountain Ben Stack.

“It is wonderful place to live,” says Ridgway. “The children have freedom and an outdoor life and the community is really friendly.”