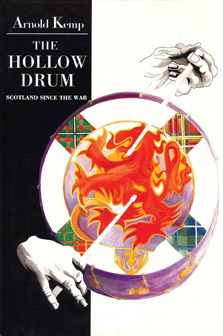 ‘SINCE THE WAR SCOTLAND HAS been profoundly altered. Its native tradition of entrepreneurial capitalism has disappeared. Its heavy industries have rapidly declined. It has become a branch economy soliciting international investment. Its crowded old cities have spread themselves into the country dormitories. The grip of the Kirk has been much weakened. The Conservatives have slumped from a historic high-water mark in 1955 to their present low ebb. The Nationalists come and go but Labour’s strength seems geological. For a hundred years and more Scotland has agitated for some form of home rule. The cycle has repeated itself at intervals. It elicits promises and placatory responses from governments. It has produced a steady increase in administrative devolution. The Grand Committee has been tarted up more times than Mae West. But still a Scottish parliament eludes us.’ The above paragraphs appeared in 1993 on the jacket of a book written by one of Scotland’s greatest newspaper editors, the late Arnold Kemp. The Hollow Drum was his personal history of the postwar period. He used his experiences as an editor and journalist as a starting point for discussing themes which he considered both in their historical context and their modern implications, in a style that was at once anecdotal and analytical. He also attempted to listen more closely to the insistent beat of the Scottish drum. He suggested that Scotland, which so often seemed confused and divided and could not muster any collective political will, had in fact been articulating a reasonable set of expectations which were well within the gift of the British state. This Ebook edition of The Hollow Drum, published some 11 years after Kemp’s premature death allows the reader to reflect on the state of Scotland prior to the ‘Yes’ vote in 1997 for the re-convening of the Scottish Parliament and will inform those who seek more clarity on the issues surrounding Scotland’s referendum vote on independence in 2014 as to how the nation has changed during that period. Had Arnold Kemp lived, there is no doubt that he would have been at the forefront of the debate at this most important of times in the nation’s history.