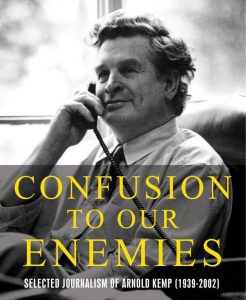 Arnold Kemp was a well-known Scottish journalist and editor whose work spans the post-war period in Scotland, Britain and Europe. Many of the well-known figures of the day such as Margaret Thatcher, Ronald Reagan, Mick McGahey, Donald Dewar and Robert Maxwell appear in this anthology which is regarded as an important text by Professor Tom Devine (who wrote the introduction), Alex Salmond and Alastair Darling.

As well as capturing important moments in history, the book has many lighter moments – such as the time that as young journalist, Kemp and collegaues spoofed the night editor of the Scotsman wtih a fake message saying that a flying saucer had landed at Buckingham Palace. Much to their consternation, he cleared the front page for the story, until Kemp faked a D notice from the Government of the day saying the whole thing had to be hushed up.

£3.99 including postage and packing