Published in The Scotsman  Tuesday 22 January 2013

Father Edward McSherry – known to everyone as “Father Ted” – was parish priest of St Mary’s Star of the Sea in Leith, Edinburgh. At the time of his death he was working and leading a full life, having recently returned from a visit to South America.

At his funeral, the church was packed with mourners, many of whom had travelled for long distances to mark the passing of this popular priest and to give thanks for what was described as a “simple life – and in the end he died as he lived – very simply” 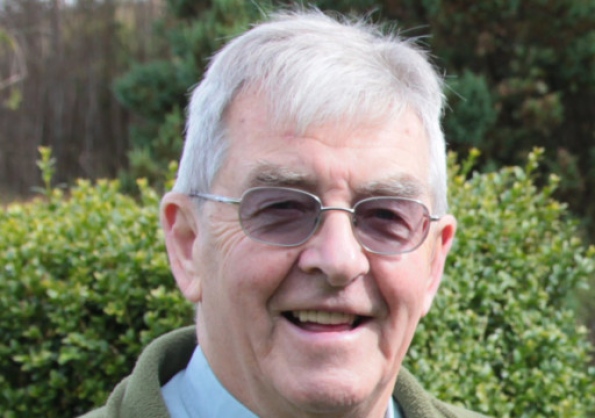 His nephew Kevin McSherry said Father Ted was a man with a “zest for life, who did not seem to get old”. The pair had recently been on a cycling trip in Northumberland and Father Ted had spoken of his plans to do more cycling when he got hom.

In the weeks before he died, Father Ted, who, in his capacity as a religious teacher, trained two generation of priests for the Oblates of Mary Immaculate (OMI), also visited the Oblates’ thriving mission in Brazil to celebrate 40 years since its founding.

But the day after officiating at Mass in the parish on Christmas Day, as he prepared to set off to join a family gathering, Ted died very suddenly of a heart attack.

He should be remembered, Kevin said, as a man “completely at ease with himself, with his  vocation and happy with his own mortality”.

Ted was a keen singer and musician and generally sang a Mass setting unaccompanied. He was also known for his constant singing in the parish houses in which he lived. Fellow member of the OMI, Father Paul Byrne, who trained with Ted in Ireland, recalled an occasion when a group of them sat up singing all night.

He said Ted had consciously “made a gift of his life” to others: to his fellow priests, to his parishioners and to his close extended family. He served as a priest for more than half a century since his ordination in 1958 at Our Lady’s Scholasticate in Piltown, County Kilkenny, in the south of Ireland.

Bishop Peter Briggnal, Bishop of Wrexham, travelled from Wales to deliver the eulogy. The two became friends when, for six years from 2004, Father Ted was a parish priest at the Oblates’ Mission on the island of Anglesey, where a small group of priests managed several parishes as a way of getting around the declining numbers of available priests.

Ted was born in 1934, the youngest of four children to a family who lived in a dockside area of Liverpool, not unlike the Leith area where he ended his life.

Shortly afterwards they moved to the suburb of Norris Green where the family were part of the parish of St Theresa, run by the order which Ted eventually joined.

Except for a short period in Australia, Father Ted spent his long working life in the UK and Ireland. He alternated between training initiates and being a parish priest, with spells in London, Liverpool, Birmingham, Ireland and Wales before coming to Scotland in 2010.

Nephew Kevin was the altar boy for his uncle at the first mass he said as a priest, held at his home parish of St Theresa’s in Liverpool, and recalled at his funeral an “inspirational uncle and a good friend” known in the family as “our Ted”.

Kevin recalled his last meeting with his uncle. “Ted stood up, after a great Christmas meal and after a light-hearted but strangely prescient discussion about funeral wishes, to announce that he was going to have an ‘angel’s kiss’. When challenged as to why he thought he would be kissed by an angel so imminently he shared the secret of a simple cocktail that has that name.

“I once arrived at the presbytery at Corpus Christi one wet winter’s day when rain mixed with sleet had chilled to me to the bone and was also revived with an angel’s kiss.