It's difficult, unfamiliar, and far from a traditional educational choice. So why are more Scottish pupils bucking the UK trend and venturing out of their comfort zone to study Mandarin? Jackie Kemp speaks to some of the people involved in the pursuit of oriental excellence. From The Scotsman April 29 2013 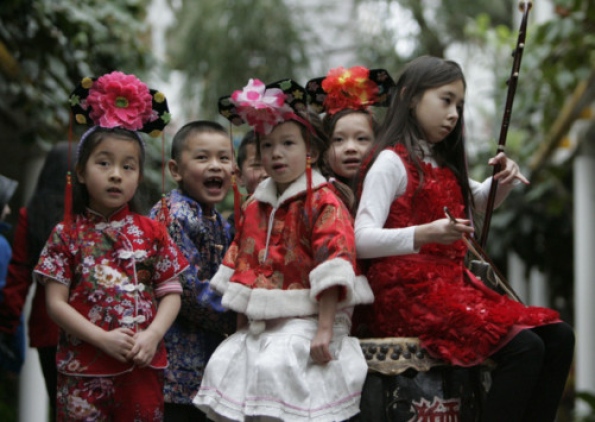 A group of girls in brightly coloured silk costumes are conversing animatedly in Mandarin – performing a short play for visitors to their school, Leith Academy, Edinburgh. The city comprehensive’s staff are clearly proud of this high-achieving group of six girls, all the children of immigrants from Africa, Asia and diverse parts of Europe, who earlier this year beat stiff competition to make it to the finals of the British Council’s Chinese-speaking competition, for the second time in a row.

Across Scotland, pupils such as these are increasingly being offered the opportunity to study this challenging subject. Last year about 300 students took a Scottish qualification in Mandarin, from 138 who took a new starter exam called “access 3” to 74 who took Higher – a steep rise on the 100 who sat all available exams the previous year.

The number is expected to be up again this year, with around 70 Scottish schools now teaching the subject. It is a rare success story: language learning in Scottish schools is at a low level by global standards. Fewer than 8,000 pupils take a language Higher each year. Two-thirds of fourth-year students sit a language qualification now – down from 90 per cent a decade ago. Only Mandarin and Spanish are increasing in popularity.

The implications of the Curriculum for Excellence at senior level next year, with its greater emphasis on student engagement and student choice, are not yet clear but the director of Scotland’s National Centre for Languages, Sarah Breslin, believes the number taking language courses to exam level can increase.

“We have to go into schools and sell languages to the students. Languages can help with their problem-solving skills, their communication skills, their cross-cultural skills. Employers and universities will be looking for candidates who have an international outlook and language qualifications show that. Pupils are going to be competing for jobs and university places against international candidates who have two or three languages under their belt. Having a language is a life skill that is going to open doors for them.”

She said while it is not possible for every school to offer exam courses, Mandarin is a popular choice for a third language in primary – under new rules every pupil has an entitlement to two languages.

“The children are loving it. It is so different. It can also be part of delivering the key objectives of literacy, numeracy and global citizenship,” Breslin said, adding that the state sector in Scotland is doing well at offering the language, and she does not want it to be the preserve of the private sector.

Six schools have language assistants funded by the British Council and there are 12 “Confucius hubs” in schools, where the Chinese government provides a grant of £10,000 a year to help with resources.

Leith Academy also has an arrangement with a Chinese school to send a visiting teacher each academic year. “Sometimes the visiting teachers have quite different ideas about teaching and education from ours. Their approach tends to be what we might think of as a bit old-fashioned. It is a very interesting experience for all,” said City of Edinburgh Council’s senior education manager Karen Prophet. However, only a properly trained teacher can offer exam courses and Edinburgh is one of several local authorities which now fund a full-time teacher.

Chun Huang works in Broughton and Leith, both city comprehensives with a diverse intake. “A lot of my students are eastern European or African. We have Hong Kong Chinese, Singaporeans, mainland Chinese students too. We have a lot of very good students. They work hard and they seem to enjoy the language. China is becoming more powerful and Chinese is perceived as a global language that will give the students opportunities in business.”

Leith Academy’s two Advanced Higher Mandarin scholars this year are ethnic Chinese. Although Shuyan Jo, 17, has heard Chinese at home she is still grateful for the opportunity to study the language formally with a teacher.

Shuyan said: “It has been really helpful for me to study the language at school. I could speak a bit but I couldn’t really write before I started. I think the qualification will be really useful too.”

But is Chinese just the flash-in-the-pan “fashionable” language of the moment? Last year was the last time the SQA offered Russian, once seen as an important “world language”.

Leith Academy head Jack Simpson said: “I used to be a language teacher and I remember when Russian was the language everyone was going to have to learn. Then it was Japanese, but these languages have more or less disappeared from the school curriculum. But I think the Chinese infrastructure we are putting in is more sustainable. There seems to be demand from the pupils too.”

South of the border, the story is different. The British Council has found that more schools in England are dropping Mandarin than starting it. Around 2,500 students took a GCSE in Mandarin in 2012, compared to 3,600 in 2010.

Martin Davidson, chief executive of the British Council, and a fluent Chinese speaker, said he is concerned: “There are few more important partners for us than China.

“But, despite perceptions that more and more UK schools are teaching Mandarin, all the evidence suggests that the real number is stagnant at best and far too small.”

In Scotland the number of children learning Mandarin is still rising. Scottish schools also tend to punch above their weight in the British Council’s speaking competition, with several getting through to the finals each year.

Fettes College won the intermediate category this year, while Glasgow’s Hillhead High won the beginner’s section last year. Two other state schools, St Ninian’s High School in Kirkintilloch and Madras College in St Andrews, got to the national finals in London alongside Leith Academy, and Edinburgh’s George Heriot’s, which got to the final in all three categories last year.

Many Scottish private schools now offer Mandarin. Edinburgh’s St George’s School for Girls has taught it to the whole school for more than a decade and hosts a Confucius hub. Former head Judith McClure is a founder member of the Scotland China Education Network. “It is an increasingly important world language,” she said.

George Watson’s College in Edinburgh offers Mandarin from first year and now has about 50 students on exam courses. “Research suggests that boys do better in Mandarin than in traditional modern languages, perhaps due to the spatial aspect to the language and our findings back this up,” said its head of senior school, Heather Wilson.

Dr Julian Ward is a senior lecturer in Chinese at the University of Edinburgh. He said five to ten per cent of the students he teaches are Scots, with most places on the competitive course going to English or international candidates.

He said: “Students see Chinese as something that offers opportunities to make a lot of money in the business world and many of them go to work for global companies.

“They choose Chinese precisely because it is a challenge: it’s an exciting language, a vibrant culture, with opportunities for work and travel. But it is difficult: a new writing system, a new way of speaking, a new culture.

“The main criterion that makes a good student is the ability to work extremely hard. That is pretty much all we want.”