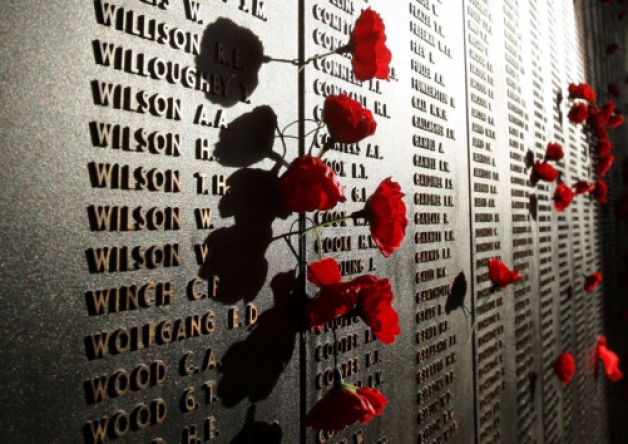 There is an argument that Scotland never really recovered from the First World War. Picture: Getty

You understand it? How they returned from Culloden

Over the soggy moors aslant, each cap

At the low ebb no new full tide could pardon:

How they stood silent at the end of the rope

Unwound from battle: and to the envelope

Of a bedded room came home, polite and sudden

Although these lines from Iain Crichton Smith’s beautiful poem “Culloden and After”, penned in 1961, are about a different war, they always remind me of my grandfather Alexander Shand.

A quiet man who died when I was a teenager, he never spoke to me about his wartime experiences in the 51st (Highland) Division. But I knew that he had suffered a great deal and I understood from my mother that he had never really recovered; and it is primarily to commemorate him that I generally wear a poppy at this time of year.

But it is not just to remember my own personal connection to the damage and loss of war that I wear one; it is also to participate in a shared act of remembrance. Other families have legacies of loss and pain to remember too and this symbol is a mutual acknowledgement of that.

Remembrance Day brings these stories to the front of our minds. On this day there is basically a choice of two actions – wear a poppy or don’t wear a poppy.

Radio Four’s The Moral Maze this week seem to conclude that wearing a poppy is a “hollowed- out symbol” which, if it is allowed to mean whatever the wearer wants it to mean, means little. Still, it seems to me, it means more than not wearing a poppy.

There are few enough shared civic actions left in our modern atomised society, where everyone seems ever more frantically busy on their own individual business. For me, it is important to feel part of something that is bigger than just my own family’s memories. Of course, I am not celebrating war by wearing a poppy; I am choosing instead to honour the notion of social remembrance.

There can be few families in Scotland who do not have some family memories of war, near or far. A friend told me this weekend how moved she was to walk over the Squinty Bridge in Glasgow’s Finnieston to see that someone has hand-tied scores of little green slips of paper to the arc of the bridge, each with the name of a soldier killed in a recent conflict. I also remember the shock of hearing for the first time from a friend on the Isle of Lewis about the clean clothes that were warming by the fire for the hundreds of men returning from war in 1918 when the Iolaire went down yards from home and more than 200 drowned.

There is an argument that Scotland never really recovered from the First World War. The confident, jingoistic militarised country that once was, died in the mud of the Somme and never was quite reborn. Scotland felt duped and cheated, as is related in the great 20th century novel Sunset Song and on the thousands of war memorials with their litanies of names and their sad stone angels in every town and village across this land.

Memories fade if they are not taken out and shared. Even our ineffable Elsie Inglis, the tirelessly heroic doctor who set up field hospitals across Europe in the First World War, is apparently being forgotten, her untended gravestone worn away by the weather in the Dean Cemetery.

It stands there near a Victorian obelisk that commemorates some grandee with many names and titles in large font that remains easily legible today due to its careful craftsmanship, and in small letters at the end: “And 300 non-commissioned officers and men of the Regiment who also fell.” That was the old Scotland. We should remember that too.

Many years after my grandfather died, I learned about the 51st DIvision’s defeat in June 1940. For him and many others, there was a long march across Europe to a prisoner of war camp in Poland, where many died. I was told stories about how he survived. A chef, he always boiled the scraps of food he picked up before he ate them and saved himself much illness. How he was the only man who could tether the bull to the plough as they had to do.

In 1945, he took part in what became know as the death march across Germany when in the dead of winter, in blizzards and temperatures down to minus 25, thousands of starving, ill-clad, exhausted, prisoners, had to march hundreds of miles to the Stalags in Germany. My grandfather lost many of his friends.

When the news came that he had survived and was coming home, for days beforehand neighbours in the street in Aberdeen, all of whom had little enough food to put on their own tables, would chap on the door to hand in an egg, or a paper bag with an ounce of sugar, to welcome him home.

I heard how, as my six-year-old mum waited at the station as the returning troops streamed off a train, pestering her mother as to which was her dad, her Glaswegian mother joked: “Just pick whichever one you want.”

But then I learned how the man who came back was different from the one who went away. When the taxi stopped outside their house and he saw the balloons and the welcome banner he begged them to keep driving. He could not face a party.

Walking along the street with my mother, any crust in the gutter would catch his eye and she would be mortified in case he would stoop to pick them up.

Never afterwards was he the confident ambitious young man who had gone away. He was silent somehow, hollowed out perhaps. It never was glad confident morning again for him.