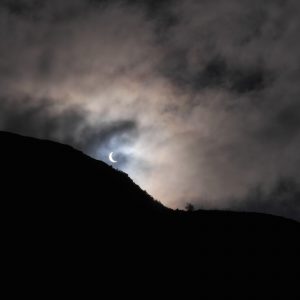 Across Edinburgh, I later learned from a straw poll of friends on face book that while some schools, particularly at the primary stage, had all the children outdoors with viewing aids, most kept the majority of the pupils in, some letting them watch on TV while others ignored the event all together. This picture was similar across Scotland, despite the fact the eclipse was more total here than across the border.

How sad. An eclipse is a special thing; it’s a moment to celebrate the great celestial coincidence that the sun is exactly 400 times the size of the moon and it’s 400 times further away, creating the necessary conditions for the great blazing light to be eclipsed by a candle.

It’s a powerful illustration of the lessons that science teachers try to instill using beach balls and tennis balls. Eclipses, surely, are so much more effective.

It seems to me that teenagers today inhabit – at least part of the time – a grim world of growing mental health problems; self-harm, pornography, drug use, drinking culture. And psychologically too, experiencing such a beautiful, natural, innocent spectacle can be powerful. These events can contribute towards a sense of perspective, a manifestation of what the world revolves around. A sense of awe, of wonder.

The artist Tracey Emin whose work constantly elides between the personal and the universal, tells of how she made an attempt to kill herself as a teenager by jumping from a bridge into a river. As she surfaced in the water, she looked into the starry dark sky above her, perhaps for the first time, and gained a new perspective.

That’s the kind of moment an eclipse can provide. I have now seen four. I will cherish the memory of the one I saw in Edinburgh in 2015; also on Lewis in 2003 and Cornwall in 1999.

I saw the first when I was a small child in 1973. I dimly remember a halt to school playtime and children passing slides around to view the eclipse through. We must have been told not to stare at the sun directly.

I wondered as I heard about young people being kept indoors during the 2015 eclipse, what has happened to our culture? What are we doing to our children? We say we wish to protect them but if child protection is not at heart about listening to and respecting children then it’s just another form of abuse. Where was Scotland’s Commissioner for Children and Young People Tam Baillie on this? It has been flagged up for months that children were going to be kept in during the eclipse. Why did the office with its 14 staff and multi million pound budget not produce some work on this?

We expend too much energy on making our children fearful of the world. What has happened to children now that we don’t trust them to take any responsibility? Why not give them pinhole cameras in shoeboxes and tell them to use those? How many are going to stare at the sun? At what point does avoidance of risk cease to be rational? How will those pupils look back on that memory of the eclipse? It won’t be something to cherish or something that aroused curiosity or wonder or began a lifetime of engagement with science; but  a missed opportunity, spoiled by a culture of bureaucracy.