'Mairi Campbell reacted angrily when she was downgraded for playing her own composition in her final exams and left Guildhall College of Music and Drama for her bolthole on the Isle of Lismore. Supportive tutor Peter Renshaw found the phone number of the family’s cottage there and called her, a moment which features in the show. “I said 'you can get tae fuck' and got on the train home to Edinburgh. I never went back.  The next thing was Peter's call to Lismore where I was recuperating.  He said that they'd keep up the fight.” ‘ 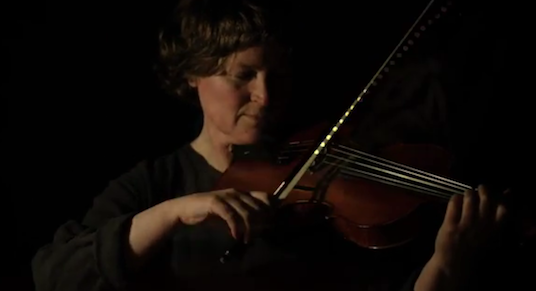 Not many musicians could hope to fill a theatre with a one-woman experimental musical about their own lives. But Mairi Campbell’s new show 'Pulse' in which she acts, sings, plays the fiddle and dances the story of her own musical coming of age has been selected to represent the best of Scottish musical culture at the prestigious Showcase event at Celtic Connections in January 2016.

The show begins with an indictment of her experience at the Guildhall School of Music in London where she felt creatively stifled and repressed.

Campbell then acts key moments of influence in her subsequent life, including impersonating Gaelic singer, storyteller and folklorist Margaret Bennet who suggests she should go to Canada, where she encounters a vibrant alternative tradition of Celtic music. Each moment is followed by an original composition.

Campbell explains: “Guildhall was stultifying for me and I was very, very angry by the time I left.  These places have no right to stifle the creative spirit the way they tried to do to me. “Although it trained me into orchestral work, I found the Guildhall repressive and tacitly aggressive.  I never had any intention of joining an orchestra. Inside I was clear about that but I was hoping that four years in a music college would give me some sort of broader understanding of music and other opportunities in the profession.  Apart from a course in Music Performance and Communication Skills taught by Peter Renshaw there was nothing.

“In my finals, my own composition was completely discounted but when I went to the head of music to ask why my mark was so low (D)  he said that my own composition was powerful and effective but they wouldn’t count it. To add insult to injury they downgraded my other offerings (Bruch and Bach) as they weren’t played with such commitment.”

Campbell reacted angrily and left the college, heading to her bolthole on the isle of Lismore. Supportive tutor Peter Renshaw found the phone number of the family’s cottage there and called her, a moment which also features in the show. “I said ‘you can get tae fuck’ and got on the train home to Edinburgh. I never went back.  The next thing was Peter’s call to Lismore where I was recuperating.  He said that they’d keep up the fight.”

Since then, Campbell accepts that things have changed for the better in the classical music scene. “I believe that the Guildhall is now one of the most forward looking of the London conservatoires in terms of broader artistic development, but it sounds like it’s still all got a long way to go.”

Peter Renshaw, a retired head of research and development at Guildhall now works as an independent learning consultant in the arts. “Ever since I became Principal of the Yehudi Menuhin School in 1975 I have been fighting the culture of fear and failure that has prevailed in conservatoires the world over and in the classical music profession.”

He recalls: “Mairi had an independent spirit and was always searching for ways of expressing her creative musical voice. This search brought together her improvising, composing and performing skills that were never fully recognised or valued by the Guildhall. Mairi’s voice was seen as a challenge to the system which at that time (1988) had very little respect for anyone who was seen as deviating from the norm.”

“Mairi was the kind of person who could only flourish in a cultural milieu in which taking risks, seeing new possibilities, creating opportunities and challenging established boundaries are seen as central to the learning process. Sadly no conservatoire would have provided those conditions at that time, therefore it was inevitable that autonomous people like Mairi would feel thwarted, undermined and frustrated by the system.

“At worst, searching students like Mairi were a nuisance and were perceived as ‘failures’. It was pure luck if their creative talents were picked up by a responsive tutor who was also probably seen as a nuisance by the ‘authorities’”

Things are changing, he argues. “Today there is some recognition that individual artists and institutions need to respond creatively to the rapidly changing cultural landscape, but way back in 1986 conservatoires resisted any deviation from the core business of ‘conservation’.

“It is interesting that when Simon Rattle was recently announced as the next Artistic Director of the LSO he stated that in future all professional musicians will have to have ‘improvising, composing, mentoring and performing’ as part of their portfolio of skills. Mairi was well aware of this when she was still a student.”

Leaving the Guildhall behind, Mairi charts in ‘Pulse’ a journey of discovery, which takes her to Mexico and Cape Breton before returning to take up her bow in the traditional music scene in Scotland, with references in the background to her love story with her husband and musical collaborator Dave Francis. He appears as the stranger who teaches her to play her first tune by ear, and is heard again at the end welcoming her back to Scotland.

In Scotland, always unconventional and challenging,  Campbell became part of a group of players encouraging traditional music to shed the constraints they believed the Victorians placed on it and to draw on broader influences.

In ‘Pulse’, Campbell demonstrates that far from standing still, she continues to move on in new and exciting ways to deliver a fresh and original creative view.