Catterline in Winter. Joan Eardley. Images Courtesy of the National Galleries of Scotland

There are many powerful pieces in the current exhibition of Modern Scottish Women’s Art from the late Victorian era to the early 60s and the show casts light on the challenges that women artist faced.

They had to contend with barriers such as the bar on married women’s employment and the misogyny which meant they were not admitted to bodies like the RSA. There was prejudice from families which made it harder to train and caring responsibilities which absorbed their time and emotional energy.

But these were strong women all of whom earned at least a partial living from their endeavours as artists and this exhibition is a rare opportunity to see their often unfairly neglected work.

The exhibition ends in the early 60s, with Joan Eardley’s broiling seascapes, her reclining male nude which subverted the form and was seen as shocking; and the pioneering abstracts of Wilhelmina Barns-Graham, surely two of the UK’s most original and important 20th century artists. Many of the artists worked in Paris or London; several had solo exhibitions. it’s a shame that no other gallery has so far voiced an interest in taking this show. It could be an opportunity to set what was happening in Scotland in a wider context. 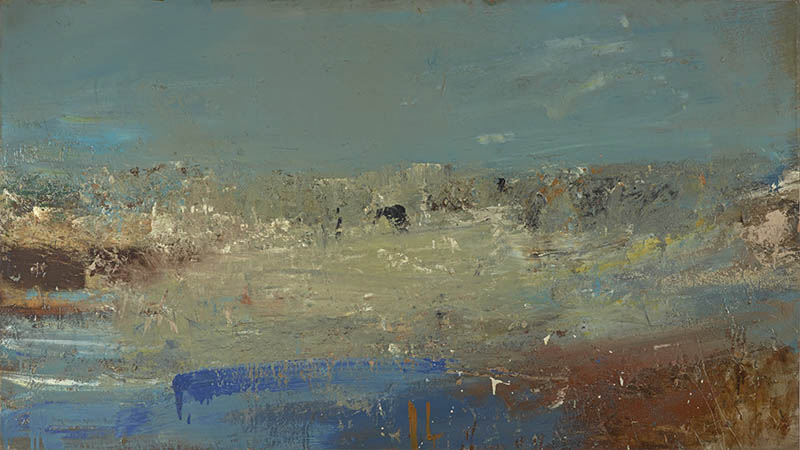 In the first room, is a bust by Liverpudlian Gertrude Meredith Williams of a sleeping beggar woman and child: the woman approached Williams when, as an impoverished young artist she maintained a studio in Paris for five years. Williams had no money to give but she fed the pair and worked while they slept. Later, Williams got around the ‘marriage bar’ which forced women art teachers to resign on marriage, by passing up teaching work for commissions.

Spaniards playing cards outdoors by Mary Cameron is entitled “Les Joueurs”. An intrepid Victorian traveller, she maintained studios in Madrid and Seville and painted such gorily-realistic canvasses of bullfights that they were later reprinted as anti-bullfighting propaganda (none is included here). Cameron told Scots Pictorial magazine in 1902 that “being an artist ‘means hard manual labour. It means pulling up your sleeves and setting to work.” Although nominated for membership of the RSA four times, she was never admitted.

Here too are sun-dappled female figures by Bessie MacNicol, whose death in childbirth was certified by her artist and consultant gynaecologist husband Alexander Frew, who later committed suicide. After his death his second wife sent all of Frew and MacNicol’s paintings to McTear’s auction house in Glasgow, many are still unarchived.

In the next room is work by one of the most famous Scottish women artists, Margaret MacDonald Mackintosh who along with her sister Frances and Charles Rennie Mackintosh were prominent members of the Mackintosh school. Frances, many of whose works were destroyed by her husband, is not included because few of her works on paper survive.

“Rest Time in the Life Class” by Dorothy Johnstone, who was forced to resign her teaching post at Edinburgh College of Art on her marriage, shows female students painting a female nude in 1924. 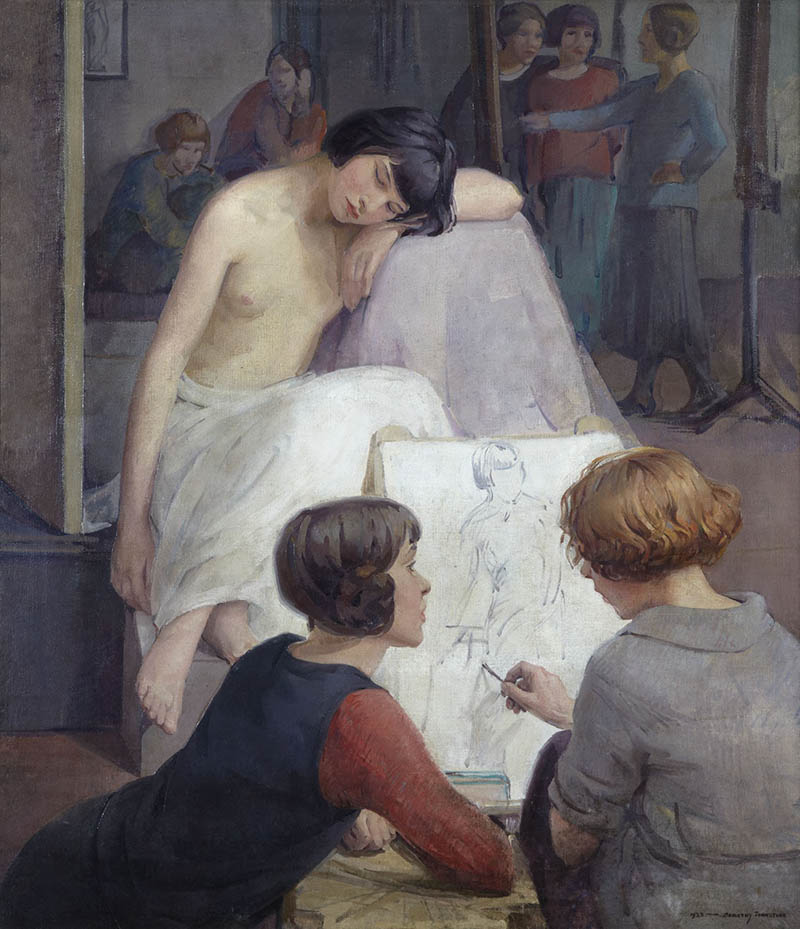 Johnstone carried on painting, often at her kitchen table which she preferred to a studio; but there are some poignant works here by her friend Cecile Walton, who stopped painting when her marriage failed and she became a single parent. Her most famous work, a  self-portrait of 1920 entitled ‘Romance” references Venus and the Madonna, depicting her struggle with the demands of femininity.

Mabel Pryde Nicholson’s chief subject was her four children and she was punctilious about paying them small sums of money to pose. Pryde and her husband shared a studio but she wrote to her son, the artist Ben Nicholson: “I am longing to work, but I must let Father have the studio as it means cash.’ Her daughter Nancy, pictured here dressed as a Harlequin, later married the poet Robert Graves.

Two paintings from private collections by Agnes Miller Parker demonstrate her use of Vorticism and Cubism to create complex scenes and suggest that art historians should now recognise her as a British artist between the wars using European techniques.

Norah Neilson Gray, a nurse in the First World War, painted a scene in a war hospital in France for the imperial War Museum. In the Second World War, auxiliary Doris Zinkeisen, was one of the liberators of Belsen and painted a haunting image of the victims.

The exhibition takes as its endpoint the death in 1965 of the first full academician of the RSA, Anne Redpath. Her  Matisse-inspired “Indian Rug” is one of the jewels of the Scottish Gallery of Modern Art’s permanent collection.

Redpath rejected a choice between work or love. She said:  ‘Young women often come up to me and say ‘I’m going to be like you and give up everything for painting’ – but that’s not how I see it at all. I could never have sacrificed my family to my painting and I don’t think anyone else should either. We lived in France for fifteen years and I put everything I had into house and furniture and dresses and good food and people. All that’s the same as painting really, and the experience went back into art when I began painting again.” 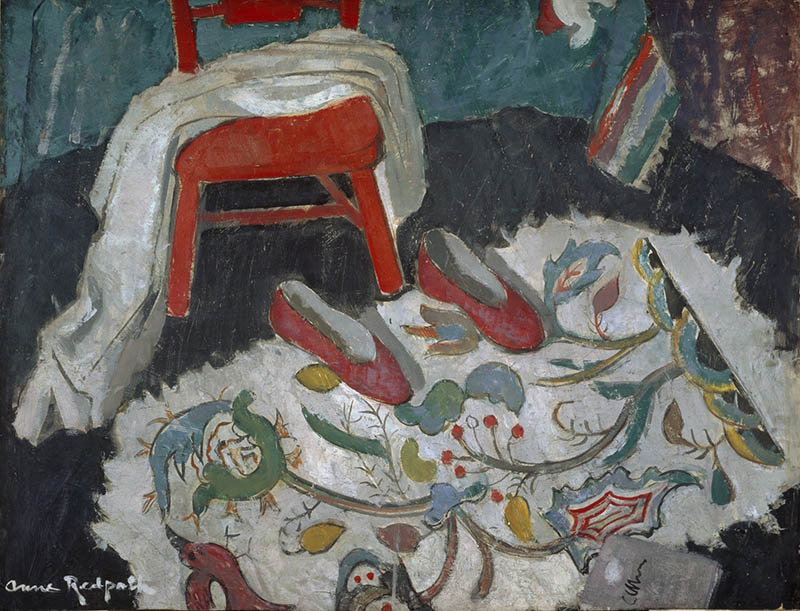