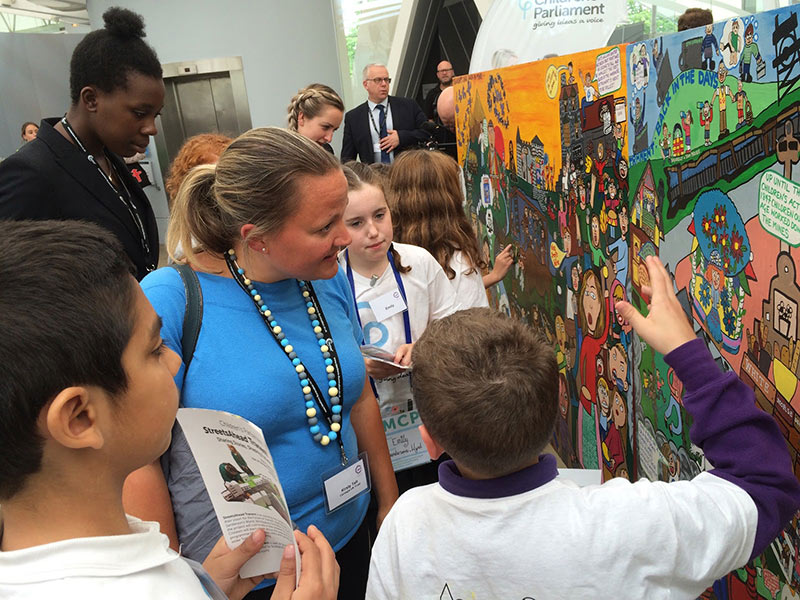 On a recent afternoon, as a weak Spring sun shone over Edinburgh’s Charlotte Square picking out crocuses in the square’s central garden, the door of  Bute House  - official residence of Scotland’s First Minister - opened and a group emerged from a lengthy consultation with the Scottish Cabinet. They huddled together on the steps, reporting to an accompanying cameraman about the event. But as they did so they began to hop around and skip up and down the steps in a manner most unusual for the dignitaries who generally emerge from discussing affairs of state there.

These delegates were all primary school children -  a small group from the Children’s Parliament (CP) which had come to talk to Nicola Sturgeon and Education Minister John Swinney, as well as other members of the Cabinet and Scottish Government officials about what is important to children in Scotland today.

There has been a lot of coverage of Scottish pupils’ below average ranking in one global comparison, PISA. But little attention has been paid to commendations from another international body, the UN Convention on the Rights of the Child (UNCRC), for work that is being done by the CP across the country on consulting with children.

These four children aged 10 to 12 in the Bute House delegation were all CP veterans, having travelled to UNCRC in Geneva last year, where they won plaudits for their presentation of a project from East Lothian, StreetsAhead Tranent. In the former mining town, child “imagineers” created a colourful mural about how their town could look, complete with bug hotels, water fountains, picnic areas and slides.

The Children’s Parliament works with groups of children across the country, from looked-after children in Fife to children from across the city imagining Aberdeen, using art, story and play to help the youngsters think about their lives and share their thoughts and experience. Instead of their highest achievers, schools are generally asked to select children who would most benefit from the opportunity and the experience of being part of the Children’s Parliament is in itself intended to be motivating and confidence-building. (Here is a video of a CP contribution to the Climate Change BIll.)

It is 21 this year and to mark this anniversary, the CP has produced a report on what children want from school, entitled “School Should Be A Joyful Place” which encapsulates some of the hopes and concerns children have about where they spend so much of their young lives. It carries an image of childish writing directed at teachers: “Useful advice: If it’s really boring for you, this will make it boring for us!”

One of the founders, Cathy McCulloch, who escorted the children to the consultation at Bute House, said she hoped the consultation with the Scottish Government was the first of many. The children showed a short film and talked about the importance of being loved, safe places to live, firm but fun teachers and bullying being dealt with. “This felt pretty ground-breaking.  I felt proud of the children and proud of our government for taking children and young people’s views to the heart of government and demonstrably taking them seriously.

“The children’s contribution was unscripted.  They were trusted to have conversations on their own, unmediated by adults. The First Minister committed to an annual meeting and also said she was committed to finding ways to engage beyond this.”

Emily, 11, said she had told the Cabinet that it was important that teachers deal with bullying, which she felt mainly took place in the school playground. “There are teachers in the playground but bullying usually gets taken to the classroom teacher and they don’t always deal with it. Teachers think their job is to educate children but they should realise it is also to support children and to help them when they are finding things difficult.”

She also wants to see a friendlier Scotland. “People should smile when they walk past you, or just give you a little wave,” demonstrating with a hand.

Emily said the experience of being part of the delegation was “awesome, epic and amazing”. Hannah,11, agreed, and added that she thought children should be listened to. “And there should be not so much violence and no more smoking.”

Dylan, 12, said “Teachers should be firm but fun. At the moment some are far too strict.” He also very much enjoyed the experience of meeting government ministers and also going to Geneva. “We asked questions. The question I asked was about Mozambique. I asked why there isn’t enough clean water to provide for all the families. The answer was that they are working on it.”

Cameron, 10, said the experience of meeting John Swinney and Nicola Sturgeon was “magnificent”.  Before being part of the Children’s Parliament, Cameron said he had felt introverted and sometimes angry because he couldn’t express his feelings. Since his involvement, he said: “I feel more confident, more joyful and just an all round better person. All this great stuff has happened, going to Geneva, meeting the First MInister and having a full on chat.”

Standing next to him, McCulloch responded: “I just want to give you a hug. Can I give you a hug?” Cameron nodded and was briefly enveloped in a warm embrace. Meanwhile, Dylan, standing lightly at the top of the flight of stone steps, cast a measuring look towards the ground. McCulloch straightened up. “Come down from there now,” she said in a firm but conversational tone. Dylan ran down the steps and, back down to earth, the little group headed away from its august conference.