Real newspapers can be used for many things that their digital counterparts never could - from lining the veg box to making paper boats and beyond. Artist Jane Couroussopoulos finds a novel use for the pile of old Guardians she keeps in her studio, turning them into works of art. 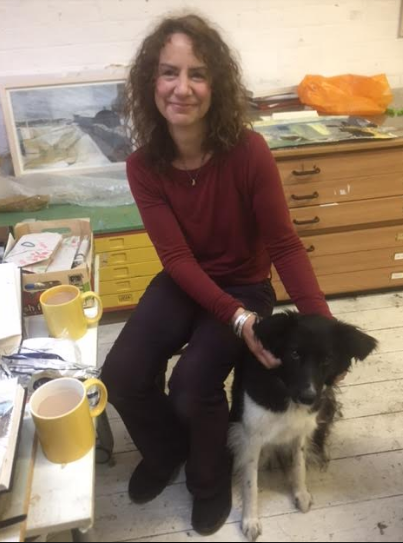 Jane and Poppy in the studio.

At first sight, Jane’s landscapes in unsaturated colours, shades of blue, grey and green, rusty reds and brown, appear to be paintings. But the colours that predominate are familiar, the deep blue of the Guardian’s masthead, the verdigris of the sports section and the pale pink of the Financial Times.

Jane and I are old friends, having been in a book club together for the best part of two decades, chewing over culture, politics, and watching our children grow. Although other roles as a teacher at Leith School of Art and as a dedicated volunteer for the Samaritans still compete for  attention, in the last few years since her children left home, Jane’s art has developed in new directions.

Visiting her at the studio in an 19th century warehouse overlooking the Water of Leith, which she shares with another artist and free-spirited rescue dog Poppy, an early stage work stands on the easel, jagged shapes torn from newspaper applied to card. 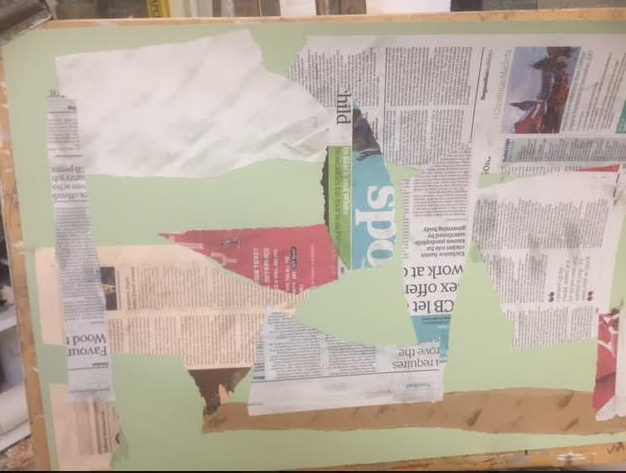 A box on the floor nearby is full mainly of old Guardians – the paper Jane mainly reads. She is less keen on the FT as a reader, but she likes the pink. On the table, next to a yellow coffee mug are boxes of oil bars, oil pastels and graphite sticks that she layers on top of the newsprint.

On another easel is a finished picture of St Andrew’s Ukrainian Church in Dalmeny St in Edinburgh, next to a gap site screened with a blue plastic awning. The northern sky which takes up most of the work is a complex, textured off-white. 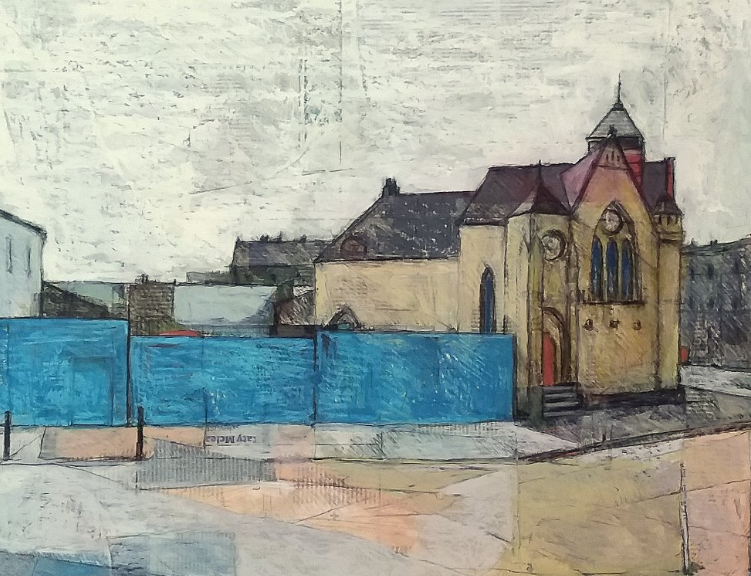 Jane’s pictures are actually collages, made from newspaper and drawing, but the effect is so subtle that it takes a close inspection to realise what technique has been used. She places the paper upside down or sideways so that individual words are not visible. “That could be distracting”. Then she incorporates the paper into the image that she wants to creates, sometimes highlighting the lines beneath, sometimes blurring them.

She explains: “I used to only paint, drawing simply for developing an idea, but started using this approach with students to free them up. I began to rather envy the satisfaction to be had working in this way :adding and obliterating.”

The overall effect, in the works that lines the studio walls, is one of depth. A tiny church overshadowed by a looming 1970s office block is rendered from faded words. The beachscape in black and white suggests differently reflected light. 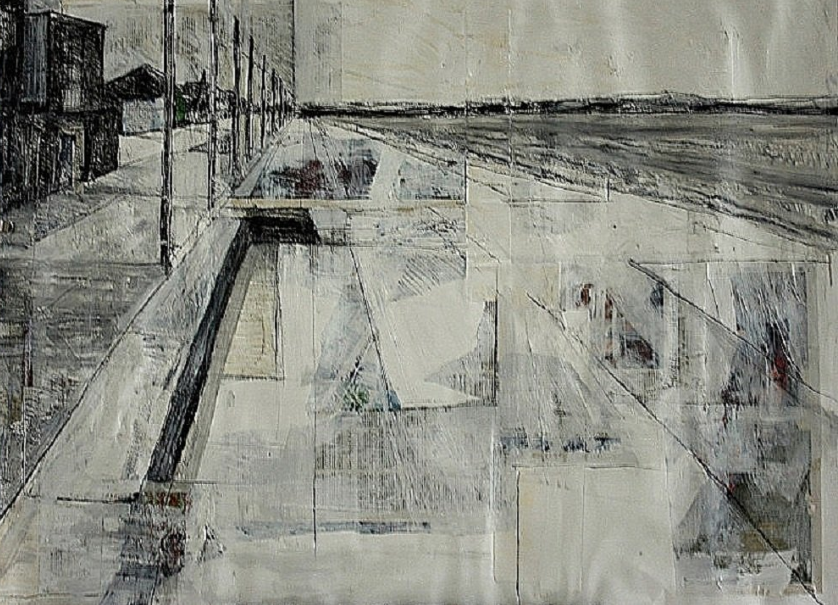 Of Greek heritage, Jane and her husband, who is an academic, spend most summers in the Mediterranean. She has been developing the newspaper collage technique for three years, initially through a series of works inspired by the Kandylakia – roadside shrines that stand, often marking the sites of road accidents, by country roads in Greece. 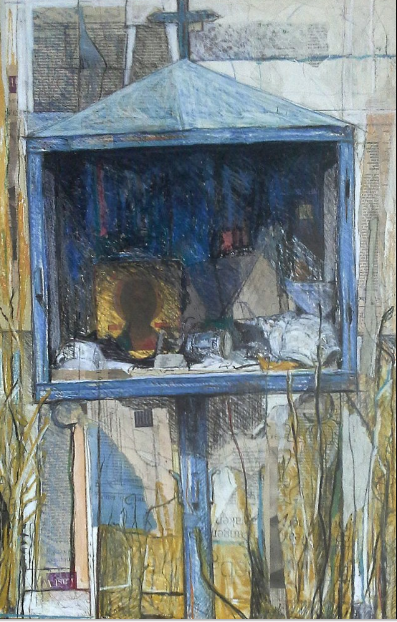 The shrines are often neglected, paint colours fading and the contents rusting or falling to pieces. Acts of remembrance which are themselves forgotten, they are captured poignantly in the rubbed out lines of yesterdays’ papers.

Jane Couroussopoulos will be exhibiting alongside Kittie Jones and Kenneth Le Riche, at the Sutton Gallery, Edinburgh in Autumn 2017. Her website is http://janepaint.com/