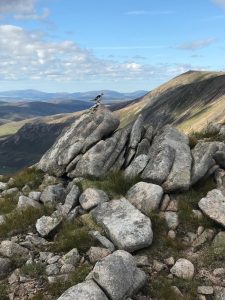 Rob’s big day out across the estate was with our son, and for Walter the trip raised questions about Scotland’s land ownership. Land reform is a hot topic in Scottish politics – There are many large estates in private hands and this is described by the Scottish Government as inequitable. The Highland Clearances generally come up in any debate about land ownership. Changes in tax are in progress, new laws are planned.

On a 40-mile round trip, Rob and Walter saw very few people except at the Big Hoose. In fact, they came across the remains of a tragic wartime air crash where a plane went down in January 1945 with the loss of five crew. The remoteness of the spot is evidenced by the fact the wreckage wasn’t discovered until August that year.

It is a rocky, precipitous and at times boggy domain, not suitable for farming and it would be difficult to imagine how it could be used to bring in any significant income. Estates like this tend to be bought by wealthy people who value the peace and seclusion a Scottish retreat can offer.

In this particular case, around the substantial estate house men were at work renovating it, Walter said, and moving earth with diggers on the drive. In the hills, trees were being planted and protected from the deer by netting. Walter’s point was that he could see that this owner is making a contribution to taking care of the land. “I don’t know how or where he made his money, but he seems to be spending some of it in the Highlands. Isn’t that a good thing?”

Similarly, the nearby estate of Glenfeshie is being successfully rewilded and its tumbledown houses sensitively restored by Danish billionaire Anders Pederson and his wife Anne Storm Pedersen. Further north, Scotland’s right to roam legislation was preceded by the “Letterewe Accord” which the Ramblers Association struck after two years of negotiation with reclusive Dutch billionaire Paul van Vlissingen. This important law affirms the right of ordinary people to explore, to ramble, to camp out. We do so in a way that seeks to minimise environmental damage.

More people than ever now visit the Highlands but although some spots are busy with tourists, you don’t usually have to wander very far from the car parks to find yourself alone. One dreich night, like two Highland drovers lying down in their plaids, Rob and a friend in quest of some climbing, bivouacked in the shelter of a boulder on the Cairngorm Plateau, seeing ptarmigan and an Arctic hare.

Once long ago the Highlands were relatively populous, before the clearances. You still come across in places the remains of their ruined cottages, windowless walls, tumbledown hearths, though quite rarely. If people had remained in large numbers, perhaps the landscape would look very different now.

On our Highland break, my exploration was generally more figurative than actual as I sat book in hand in the hot tub, sometimes in the rain (you can’t beat a cheap paperback for this purpose). I felt however that I glimpsed some of these vanished Highlanders through my reading: Walter Scott’s first novel, Waverley; Memoirs of  Highland Lady and Samuel Johnson’s “Journey to the Western Islands”. Travelling the Hebrides in 1773, Samuel Johnson finds the people coping with the grim aftermath of Culloden, forbidden to bear arms or wear plaid, struggling with grinding poverty and rising rents. A general exodus to the New World has begun.

“There seems now, whatever be the cause, to be through a great part of the Highlands a general discontent… the accounts sent by the earliest adventurers, whether true or false, inclined many to follow them; and whole neighbourhoods formed parties for removal; so that departure from their native country is no longer exile.  He that goes thus accompanied, carries with him all that makes life pleasant.  He sits down in a better climate, surrounded by his kindred and his friends: they carry with them their language, their opinions, their popular songs, and hereditary merriment: they change nothing but the place of their abode; and of that change they perceive the benefit.

“Some method to stop this epidemic desire of wandering, which spreads its contagion from valley to valley, deserves to be sought with great diligence.  In more fruitful countries, the removal of one only makes room for the succession of another: but in the Hebrides, the loss of an inhabitant leaves a lasting vacuity; for nobody born in any other parts of the world will choose this country for his residence, and an Island once depopulated will remain a desert”

Scott’s lively and readable first novel “Waverley” or “Tis Sixty years Since”, was published in 1814 but seems very modern in its playful approach to history. Scott sets his fictional English hero at the very centre of the ‘45 rebellion in which he ends up changing side and fighting for the Jacobite cause, for reasons more of friendship than conviction.

Scott describes the way of life of a Clan Chieftan, who for cultural and political reasons is forced to maintain a generous hospitality, providing food and drink for the clansmen, washed down with wine for those at the top of the table and whisky for those further down. Those at the foot have no complaints, saying that the wine is too cold for their stomachs and they prefer whisky. The Highlanders are ever punctiliously polite, which Scott ascribes to their habit of bearing arms everywhere they go, even to Church.

The clan chief supports his way of life through blackmail, extorting protection money. In a footnote, Scott adds: “Indeed, the levying of black-mail was, before 1745, practised by several chiefs of very high rank, who, in doing so, contended that they were lending the laws the assistance of their arms and swords, and affording a protection which could not be obtained from the magistracy in the disturbed state of the country. The author has seen a Memoir of Macpherson of Cluny, chief of that ancient clan, from which it appears that he levied protection-money to a very large amount, which was willingly paid even by some of his most powerful neighbours. A gentleman of this clan, hearing a clergyman hold forth to his congregation on the crime of theft, interrupted the preacher to assure him, he might leave the enforcement of such doctrines to Cluny Macpherson, whose broadsword would put a stop to theft sooner than all the sermons of all the ministers of the synod.”

“Generally about fifty people sat down to dinner there in the great hall in the shooting season, of all ranks. There was not exactly a “below the salt” division so marked at the table, but the company at the lower end was of a very different description from those at the top, and treated accordingly with whisky punch instead of wine. Neither was there a distinct ” yellow drawing-room” party, though a large portion of the guests seldom obtruded themselves on the more refined section of the company unless on a dancing evening, when all again united in the cleared hall.

“It was a rough royalty, plenty, but rude plenty, a footman in the gorgeous green and scarlet livery behind every chair, but they were mere gillies, lads quite untutored, sons of small tenants brought in for the occasion, the autumn gathering, and fitted into the suit that they best filled…

And: “We were often over at Kinrara, the Duchess [of Gordon] having perpetual dances, either in the drawing-room or the servants’ hall, and my father returning these entertainments in the same style. A few candles lighted up bare walls at short warning, fiddles and whisky punch were always at hand, and the gentles and simples reeled away in company until the ladies thought the scene becoming more boisterous than they liked remaining in. Nothing more, however. A Highlander never forgets his place, never loses his native inborn politeness, never presumes upon favour.”

Later that century, Scotland’s First People were largely displaced. In many cases, they became part of the wave of settlers who in their turn displaced First People in the lands they went to, Canada, America, Australia, New Zealand. Behind them, the land lay still.

Iain Crichton Smith wrote in his poem “Culloden and After”: “There was a sleep. Long fences grew/ across the vacant croft. The silly cows were heard/ mooing their sorrow and their Gaelic loss./ The pleasing thrush would branch upon a sword”.

It seems  – and it is – inequitable and unfair that some should own so much land while others own none at all. Things are managed very differently in other countries such as Denmark where no individual can own more than a certain size of plot.. But there are other considerations.

Scotland has a unique history and geography. The particular way that Scotland’s story unfolded has created the landscape we have come to love, home to few people, but instead to the lapwing, curlew and sea eagle, to the red squirrel, the Arctic fox and the Scottish wildcat, where are found Europe’s tallest trees, Douglas Firs that soar to above 200 feet. Here too are rare wildflowers, which like animals and birds such as the capercaillie, are threatened by climate change.

Rather than trying to unmake history, Scotland should build on it. Rich landowners, whether native-born or from elsewhere, who cherish Scotland’s wild places, are able to use their resources to help to care for for it and to protect it from the challenges of the future.