The theme of the 70th Edinburgh International Festival this year is remembering the ‘Spirit of 47’. Among the audience is at least one faithful festival-goer who was there at the start - my uncle David Kemp. Here are some of David’s reminiscences of his many Festivals, stretching back to those post-war years when the colour and beauty of art returned to a traumatised world. 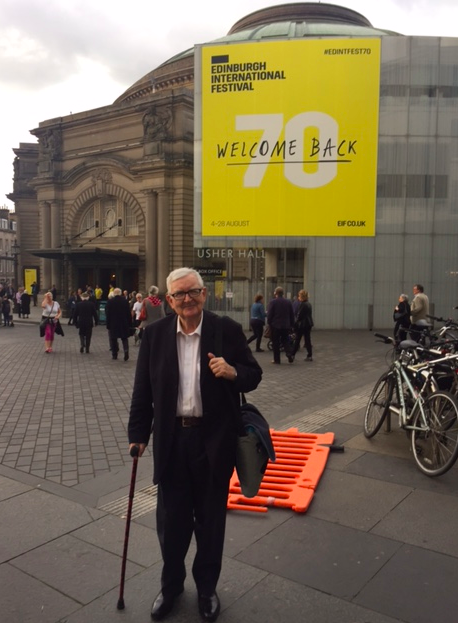 David Kemp outside the Usher Hall, Edinburgh before the Mariinsky/ RSNO concert on 23/08/2017

I was incredibly lucky that Dad (Scots playwright Robert Kemp) was on the Festival Council and got free tickets. I was also able to watch rehearsals at the Usher Hall. When Dmitri Mitropoulos finished rehearsing the new York Philharmonic, he invited the entire orchestra on holiday to Greece! And I watched the most famous Festival Quintet ever rehearsing. I remember Solomon (piano) coming down to the stalls to talk to Pierre Fournier (cello) and I heard him tell him to back a horse running that afternoon. I have never forgotten the name, Royal Palm!

I think I must have seen Mozart’s Cosi fan tutte (Glyndebourne) at the 1948 Festival, as I can distinctly remember Suzanne Danco, who sang Fiordiligi. It’s never been my favourite opera, and I now realise I probably saw it when I was too young.

The Festivals then weren’t as big as they are today – far fewer events. But my goodness, the quality was staggering, with orchestras like the Vienna Philharmonic, conductors like Bruno Walter and George Szell and singers like Kathleen Ferrier, Lotte Lehmann and Peter Pears.

Your father Robert Kemp was very involved in those early festivals, what is your recollection of that?

Dad was a big influence on these early Festivals. The 1947 programme book has a biography and photo of him, And he contributes an article on Scottish dramatists to the 1948 book. I do remember going to the first production of the Thrie Estaitis (Robert Kemp’s adaptation of the original text) in 1947, and I remember Tyrone Guthrie and Tanya Moiseiwitch, the famous designer, stayed at our home in Warriston Crescent during rehearsals. She had my bedroom (we were on holiday in Glen Clova). And of course there’s a lot about Louis Jouvet and L’Ecole des Femmes (which RK adapted the next year as Let Wives tak Tent) in the 1947 book.

You have a lifelong love of opera – was that influenced by your exposure to it at the Edinburgh Festival?

My earliest operatic memories are of two operas – The Magic Flute (Mozart) and Der Rosenkavalier (Richard Strauss). Both made an incredible impression, and remain my two favourite operas to this day. I have seen both many times since – in various places, including Paris, Berlin and Dresden. And of course I have the DVD of that wonderful film of the Magic Flute done by Ingmar Bergman in the Drottningholm Palace Theatre, Stockholm. I can’t remember much about the casts -it was 70 years ago, after all. All I’m sure about is that Anneliese Rothenberger was Papagina in the Magic Flute, and that Lisa della Casa was Sophie in Der Rosenkavalier. I’m pretty sure it was the Hamburg State Opera, and the names Martha Modl and Sena Jurinac come to mind (possibly the Marschallin and Octavian  in Rosenkavalier).

(Later, having checked the accuracy of these recollections at Glasgow University Library) The Hamburg State Opera with The Magic Flute and Rosenkavalier that I remember so vividly, plus the New York Philharmonic that I had the anecdotes about, all didn’t appear until 1952 when I was 15. Perhaps it makes sense that a teenage boy – rather than a 10-year-old – would have been so smitten by two glamorous opera stars as I obviously was. Yes, Anneliese Rothenberger sang Papagina in the Magic Flute, and Lisa della Casa sang Sophie in Der Rosenkavalier. I can still see them both as if it was yesterday.

Where was the opera venue and what did you wear?

With far fewer performances than there are today, there was much more of a sense of occasion. I don’t remember much about what the audience wore, but smarter than today certainly. The men would have worn dinner jackets in the Grand Circle.

My brother Arnold and I had kilts in the hunting Fraser tartan. Dad researched what tartans we were entitled to through our ancestors, and came up with Fraser. Obviously the Kemps didn’t have a tartan of their own,  not being a Highland clan! The Fraser tartan was a rather peculiar colour (from memory it had some brown), and I was never terribly keen on it.

The opera was always done at the Kings – and it was only recently that the old Empire on the Bridges got its new glass face and became the Festival Theatre. I remember going to see a very modern opera, Alban Berg’s “Lulu”, at the Kings. There was a lot of rustling of sweetie packets, and it became obvious that some amongst us were not your usual opera audience. Then, after the first orchestral interlude, a woman behind me asked,”When’s she coming on?” True! The concerts have always been done in the Usher Hall. I remember going to see Bach’s B Minor Mass, conducted by  Carlo Maria Giulini and a very hot ticket,  after a hard week’s work, falling asleep, and being wakened by the trumpets of the Resurrexit!

What about the Fringe – when did that start?

There was no Fringe in 1947 – that I remember. I’m always a bit irritated when I see people suggesting the Fringe appeared along with the official Festival. Untrue. It came at least a year or two later. Dad, Robert Kemp, is not always credited but he was the first person to use the term “the Fringe”.

What were some other personal highlights of the Festivals?

Other highlights from earlyish Festival (the fifties) would include TS Eliot’s plays, including “The Confidential Clerk”, that were premiered at Edinburgh and have almost never been done since. And I saw “Waiting for Godot”at one of its first ever performances, probably at the Lyceum. Loved it! I also remember seeing Wagner’s “Parsifal” at the Kings with student friends – so that too must have been the fifties.

In recent years, we’ve seen/heard most of the Mahler symphonies, some wonderful singers like Magdalena Kozena and Miah Persson, made discoveries like Rachel Frenkel who sang Cherubino in the Marriage of Figaro two or three years ago, and seen great conductors like Mariss Jansons with the Bavarian Radio Orchestra and Valery Gergiev.

This year we saw Gergiev conducting the Mariinsky and the RSNO playing together Shostakovich Symphony Number 4 at the Usher Hall. That was a Festival occasion as the work got its Western premier in 1962 at the Edinburgh Festival, with the composer in the audience.

I was struck by the moment at the end of the performance when Gergiev froze in place and didn’t let the audience applaud for perhaps 20 seconds. It was a real piece of showmanship.

What does the Edinburgh Festival mean to you?

The Festival has meant different things to me at different times of my life. Dad’s central role and my privileged position when I was very young has obviously given me a life-long love of the Festival.  Later, as a student, I associated Festival time with parties. I knew all the movers and shakers, like Ricky Demarco, John Calder and Jim Haynes.

Then, as a young reporter on The Scotsman in the early sixties, I did the Festival Diary. This taught me a lesson I’ve never forgotten, about not mixing your personal and professional lives. I met an old friend one day on Princes Street who told me she was one of the witches in Frank Dunlop’s Macbeth at the Assembly Hall and that they were nude. Front page exclusive. My friend was upset and her mother complained to my Mum, who gave me a ticking off I’ve never forgotten. In retrospect, it would have been O.K. to use the story if I’d made sure my friend was 100 percent happy with my doing so.

Gradually I stopped knowing everyone. I moved away, lived in the States, Canada, London, only returning as a tourist in my own city, as it were. Then, living in Glasgow for the last 30 years, I’ve tried to see a few of the best things every year, The Festival was still an annual highlight, with some great things at the Queens Hall,  etc.

So, to answer your question, the Spirit of 47 shaped my life-long interior life, with the early introduction to opera – and great music generally – that the Festival gave me. 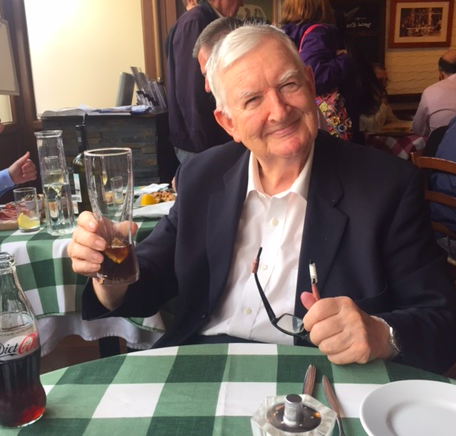 David in the Bar Italia before the concert.