Earlier this year when writing for the Guardian about the ongoing political row around Scotland’s performance in the international comparison table known as PISA, I visited Currie High School on the outskirts of Edinburgh and spoke to a group of young people who were gathered in the lab to discuss their experience of science at school with me. After the chat, where the students were generally enthusiastic and complimentary about their science lessons, I asked if anyone would consider becoming a High School Science teacher. Silence. Why not? “I just can’t stand children, Miss” answered one bright spark. After a pause, another offered the reason that it would be just “too much hard work” - and there was a chorus of agreement with this sentiment. 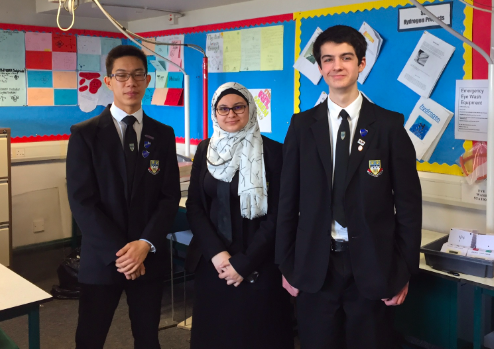 (some students from Currie)

Clearly changing horses in midstream  – or moving from one curriculum to another while in the process of teaching a full timetable has been hugely difficult and stressful for Scotland’s teachers, particularly in High School where the degree of difference from what was happening before is much greater than at the primary stage. It is perhaps not surprising that the generation that was caught up in this may have had at times a less than optimum experience.

In the process of implementation however, I wonder if some of the benefit that was hoped from the change has also been lost. In the business world big software projects often fail to deliver on the promise. Sometimes that is because the wrong product was chosen – but sometimes it is just because the process of implementation is so challenging. Getting to the benefit requires embracing change.

Some of the areas where the CforE comes in for the most criticism appear to be where the original vision has been most watered down, specifically the narrowing of subject choice at 14, and the exam diet at 16.

Many schools are offering fewer subject than before – students are choosing six courses in S3 and that can narrow their horizons too soon. But the original vision of the C for E was that a broad general education would continue through the first three years of secondary, age 12 to 15. It wasn’t part of the idea that 14 years olds would continue to choose their subjects at all. But most schools and authorities seem to have tried to just grapple C for E onto what they already did.

S2 subject choice has been happening in Scottish schools forever – I remember choosing subjects myself at the age of 14. On the plus side, it prompts lots of conversations about what the favourite subjects are and leads to some positive family involvement. But is it really still the best approach? They do this in the UK countries but I am not aware of it happening elsewhere. In the US where I am at the moment, students don’t drop a whole range of subjects at 14.

Two generations ago, 14 was the standard school leaving age. Staying on meant become part of an academic elite. Even after this ceased to be the norm, the subject choice was limited and very academic. When I chose 8 subjects there were probably only 12 or 14 on the curriculum. It was then the start of a two-year course which led up to the official school leaving age of 16.  But objectively now, offering subject choice at 14 is questionable. These are young people right in the middle of puberty who make gendered choices. One of my young associates chose computer science at 14 – in a group of 40 students across two classes there was one girl. This imbalance is going to be hard to correct later.

Schools and parents tell students not to do this, but I am probably not the only parent who suspects that some courses were chosen mainly because of who else was taking them.

The curriculum too is much broader now – it must be a headache for schools to make subject choice work. The drop in modern languages studied in Scottish High Schools is partly because the column system means they often have to compete against other more ‘fun’ offerings. Without subject choice at 14, schools could design a broad general education over three years, perhaps teaching  physics, chemistry and biology one each in the three years as happens in the US.

In that past, the norm was that students took exams in batches according to age. O Grades or later Standard grades at age 16,  then Highers at 17. These were the qualifications required to begin a four-year degree programme at a Scottish university, and students who did sixth year could assemble a more individual timetable of different exam courses.

The “piece of paper” that was acquired at age 16 marked a point at which many students were encouraged to move towards the exit. Staying on was for the bright and committed students. Schools and teachers were quite open about wanting to see the back of the less so. The big idea of the Curriculum for Excellence was to reduce the need for a big tranche of externally assessed exams at age 16. While it is not illegal to leave school at this age it is no longer encouraged. There is no longer a sense that a big red “EXIT” sign should be created here.

From 16, young people may study partly in high school or within other institutions such as further education college. But there is little unskilled work available now and employers don’t train young apprentices and keep them for life as they once did. Sixteen-year-olds don’t need a piece of paper for employers, it is better for them to stay in education for at least one more year.

The C for E idea was that in the senior phase of 15 to 18, young people should assemble a basket of qualifications that suits them. Classes shouldn’t have to be so age-based. Students could assemble a set of Nationals and Highers over the whole three years, rather than the whole school taking nationals one year and Highers the next. Students taking Highers in a subject don’t necessarily need to take Nationals as well.

In the US, students in the senior phase are assessed on a range of measures: internally assessed tests, coursework, class participation and also Scholastic Aptitude Tests – lots of fairly easy questions done at speed which are designed to highlight the potential of quick-thinking youngsters regardless of educational attainment. In Scotland, we perhaps put too much emphasis on formal, externally assessed exams – and is it really necessary for students to take them every year for the whole three years of the senior phase?

In conclusion, the big idea of the Curriculum for Excellence was to create a more student-centred approach that would deliver a better experience for children, let them enjoy school and learn in a way that allows them to achieve their potential. This remains a worthy goal, and the process is still ongoing. There is more to do. But judging from the students I interviewed at Currie, progress is definitely being made.