This summer in Copenhagen, I caught up with my friend Ann Campbell, a teacher at James Gillespie’s High School in Edinburgh, as she was 1,500 miles into a largely solo four-month cycle across Europe.

After cycling through the hilly border country to Newcastle, Ann caught a ferry to Amsterdam, then headed up through the Netherlands into Northern Germany, then took a ferry to Scandinavia, traveling as far north as the Åland Islands (which are Finnish), before turning back south.  After our meeting, she was headed south to Berlin, then Prague, and along the Danube, into Switzerland and then as autumn settles into winter, she will turn west again across France and back to the UK.

Ann plans her route as she goes, buying cycle maps in bookshops and staying in a mixture of campsites, backpacker hostels, with ‘Warm Showers’ hosts ( a cyclist-hosting website), and – in Berlin – with friends she made along the way.

In the recreation hut at a rainy campsite on the Baltic coast near Copenhagen one evening, over a bottle of red, I interviewed Ann about her journey, and looked through her sketchbook. 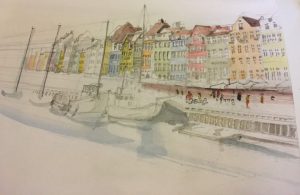 You have been calling this your Brexit journey – is that a joke?

“It is half a joke -. I feel sad about Brexit. It is great to be traveling across Europe as a citizen, to belong and to be welcomed.  I think what a shame it is that in some ways we are going to be losing the opportunity to be part of this amazing continent. And I wonder,  after Brexit will it be harder to make my way completely unhindered across Europe with no worries about visas or medical insurance, crossing borders – most of the time completely unaware that there is a border?

“It comes up a lot. Everybody I meet mentions Brexit. Everybody knows about it. It is a really big issue in Europe. Everybody loves being part of Europe and nobody understands why we are doing this. I sort of jokingly apologise and say that in Scotland we feel differently and we want to stay, and most people actually already know that. I also say that there are a lot of people in the UK who regret the way the vote went.

“But it surprises me how much people know about British politics – the guy who served me coffee today in Copenhagen was talking about Boris Johnson and Theresa May and he wanted Scotland to join the Scandinavian Alliance. 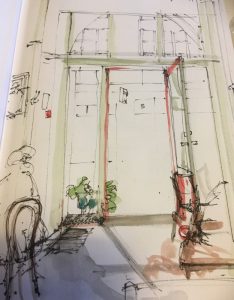 “Another thing that interests me is how much English is the language that unites European people – when a German is speaking to a Danish person, or a Swede is speaking to someone from Holland, they generally seem to speak in English. Almost all the music I hear is in English.

“Other Europeans have so much knowledge of our language and our political agenda – they know the UK is a set of different countries for instance. That knowledge isn’t confined to British politics, they know about German, Greek, Spanish politics – there is just a lot of interest about each other.

“I have felt a kind of acceptance on my journey, I have chatted to so many people from so many different countries. It’s been delightful.”

What are the other reasons for your journey?

“I have been planning this trip for a while – I took a sabbatical from work to do it., I wanted to create a sort of defining moment, something to mark the end of the part of my life that was mainly focused on child-rearing. It doesn’t mean this is the end of my involvement in family life or my work life – I love all that but I wanted to do something on my own. When I travel alone, I can go at my own pace, When you are with family or friends, you don’t always smell the pine woods or notice how big the birds’ feet are – I was fascinated by the coots’ feet, as you can see in this drawing -. 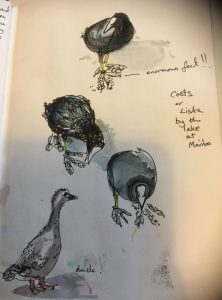 The coots had such big feet!

“Or how tall the towers are – I was drawing this one in Copenhagen and I ran out of paper. 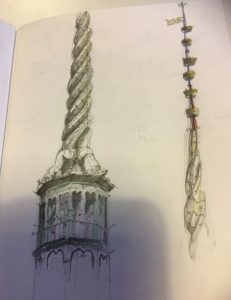 This tower was so high I ran out of paper.

“I wanted to get in touch again with the person I was when I was younger, not to be defined by other people or by my roles- being a parent, a teacher, a wife. In my past, I was someone who went on adventures – although that’s not the person my husband or my children or my colleagues necessarily know.

“When I was 16 I went interrailing in Europe and I still remember my first sight of the Alps, I was blown away by them. I fell in love with the mountains –  I was so excited, I couldn’t sleep. After that, I got into mountaineering in Scotland and in my 20s, I went to the Rockies where I climbed extreme ice waterfalls with Barb Clemes. I also climbed Cook Mountain in New Zealand. I traveled in India, Tibet and China. I wanted to reconnect with that part of myself.”

Highlights – and lowlights – of the journey so far

Getting lost – falling off – staying in the home of a stranger – Hamburg’s red light district in the small hours.

It wasn’t immediately obvious how the Netherlands bike maps compared to the numbers on the bikes signs – “I went about three times round the same underpass” – but once understood, the system was clear and comprehensive. It is incredibly bike-friendly. “Everywhere seems more bike-friendly than the UK.”

The route Ann had planned took her northeast by the sea – but a 20 mph wind was driving sand straight into her face. So, armed with the maps and her new understanding of the navigation system, Ann turned along the Flevoland polders, large tracts of land reclaimed in the 50s and 60s from the sea – “the bike paths on the polders are completely straight and they go on and on into the distance – like this drawing.” 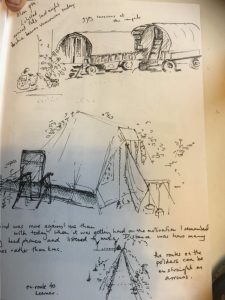 The polders were straight as arrows

Two days out of Amsterdam, pushing herself too hard, Ann couldn’t get her feet out of the bike cleats and fell off, jamming the handlebars into her rib cage and causing painful bruising. “That was a turning point in the journey. I went too far and I got too tired. I realised I was going to have to go at a slower pace. The journey isn’t a race, it isn’t about covering the ground.”

At Lelystad, Ann found a characterful campsite with gypsy caravans and tree houses. A Warm Showers host invited her to stay so she redirected her route towards his home in Drachten, back in the Holland of windmills and old houses. 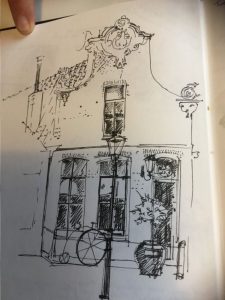 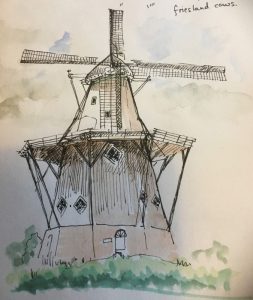 Back in old Holland

I asked if Ann was worried about staying in the home of a strange man. “Not at all, I looked at his reviews, they were really positive. He is in his 60s. He was really welcoming. He cooked me a meal and I cooked him a meal. He told me about the flixbuses, which take bikes. “I don’t feel I have to cover every mile by bike. I don’t want to be in a hurry and have to do crazy distances.

Now on a tight schedule to meet family members in Scandinavia for a few days holiday, Ann booked a bus from Groningen to Hamburg. “I arrived in Hamburg at 2.30 in the morning, in the middle of the red light district. I felt really vulnerable”. A Norwegian cyclist got off the bus at the same time and the two of them palled up and sat in a kebab shop until daybreak, with pimps and prostitutes coming in and out.

At 5.30am, Ann headed north out of town, stopping mid-afternoon at a youth hostel where she fell asleep under a tree waiting for it to open.

A crowded coast – a non-existent campsite – flowers in the dustbin

Reaching the northern coast of Germany, Ann felt exhilarated to see the sea again, before realising that a large population and a short coastline meant the area was so crowded with caravans there was barely room for a small tent.

Feeling the need for wilderness, And kept going, taking a ferry from Puttgarden to Rodby – only to find the campsite marked on the map was no longer there. Along with a couple of fellow-cyclists she met on the ferry, Ann dig deep to find the energy for an extra couple of hours to Maribo.

At another point in Scandinavia, Ann found herself among a gang of illicit operatives lurking in the carpark of supermarkets in the middle of the night. “It was like some kind of heist – but actually we were dumpster diving.” Getting into the dustbins at the back of a couple of supermarkets, the gang removed food that was past its sell-by date. “It was mostly cheese”. There were some flowers in there – having forgotten them first time, Ann got the team to pick the lock a second time to retrieve the blooms.

Copenhagen – and onwards. A nudist campsite – and don’t set off fireworks in the woods!

After a relaxing couple of days at a campsite outside Copenhagen, Ann grew restless and made tracks, heading for Berlin. Since then I have had the occasional message from her.

One night, after a long day of off road cycling, Ann arrived weary at the campsite that was marked on the map – only to find it was a nudist one. “I have just had a liberating swim,” she messaged. Luckily, the dress code was clothing optional.

The next night was a relaxed campsite with an honesty shop where you took what you needed and settled up later, where Ann shared a bottle of wine with a German music teacher.

In Berlin, Ann stayed with German cyclists she had met en route, a kind couple who fixed an issue with the handlebars that was causing numbness in her fingers. 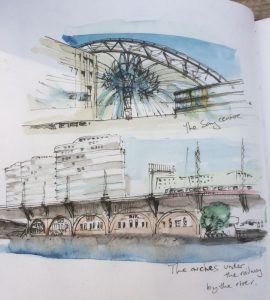 Arches under the railway in Berlin

Next, traveling through the former East Germany towards Dresden, Ann reported a countryside of “well-kept ghost villages”, almost no-one around, no shops, no pubs. An environmentalist she met said the depopulation happened after the collapse of nationalised industries after the Berlin Wall came down.

“There were signs that I couldn’t understand on the tracks yesterday that looked like – don’t set off fireworks on the woods – but it was later explained to me that a large part of the area that I was cycling through was old Soviet Army training and live mines and bombs are still there and so the area can’t be developed and people can’t walk off the cycle tracks. So the woods are eerily beautiful and empty of people. In fact, I was cycling on stunning tarmacked cycleways for miles and miles through beautiful forest completely on my own for hours.

“When I reached the Elbe cycle track today on route to Dresden it was a bit of a shock to have the heaving mass of cycling and walking humanity buzzing up and down the cycleways and cafes and guest houses around every corner when away from the river it is so different.”

Two months in, Ann, 56, is still happy to be striking out on her own. The bike suits her as a way to get around, supporting her joints and allowing her to travel independently under her own steam. “I’m really loving the traveling. I’m comfortable with the  rhythm of it, the self sufficiency and transient friendships of strangers meeting.” 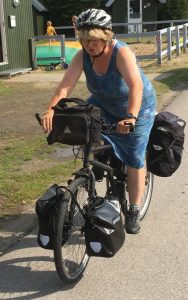 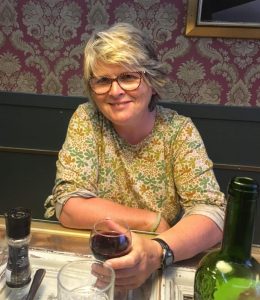