I read this quote in an article – by Alan Taylor I think – years ago. Barcelona is a wonderful city, but I don’t think it would ever feel like home to me. And also – Glasgow’s City Centre is a world-class destination up there with Barcelona, though less appreciated.

I have visited it several times during the recent lockdown  – giving care to an elderly relative. Wandering through the lockdown-empty streets, I found myself spotting things I never noticed before. Shafts of spring sunshine burnished statues of Roman Gods lurking in alcoves, pigeons alighted on gleaming domes. 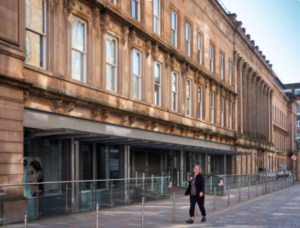 At Strathclyde Uni, close to George Square, the pandemic enabled them to bring in some long planned pedestrianisation to give it more of a campus feel. I love its mixture of old and new buildings.  Gerald Laing’s 1970’s “Callanish” sculptures rust elegantly on a flower-edged lawn and ivy grows over stone arches remaining from the old maternity hospital that once stood there, Rottenrow, which is commemorated by a statue of a giant nappy pin. 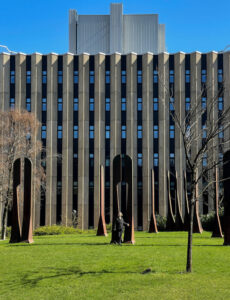 The area around Strathclyde is designated as “the Learning Quarter” area – next to “The Merchant City”. Despite its long, slow regeneration, Glasgow City Centre has not yet acquired the residential population of other post-industrial places like Liverpool or Manchester.  Although the area around Glasgow Cross  was once the most densely populated in Europe, the population slumped last century and only 20,000 live there now. The city plan vision is that this will double by 2035, growing mainly in these two areas. 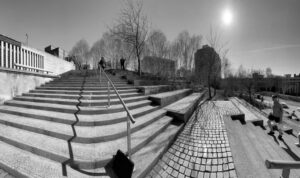 Will cities remain attractive if working from home becomes the general rule?

Is this plan still realistic in view of the pandemic?  Of course, many people are reassessing where they want to live. But if working from home for most of the week becomes normal over the long term, might people find the suburbs boring? Many were built as dormitories, a refuge from the hurly burly of city-living. As Andrew Marr wrote in his New Statesman column recently: “Friends pity me for being stuck in town. But unless you use the car, a daily country walk, like a town walk, inevitably becomes limited to a certain number of circuits. The difference in Regent’s Park is the company: other regular pedestrians include well-known comedians, actors, authors and diplomats. Lots of pauses. Lots of conversations.”

Other attractions of city dwelling are great food shops – the wandering out for a loaf of artisan sourdough, a newspaper or something for tea. Glasgow City Centre is lacking in these kinds of shops currently – it doesn’t have a fishmonger’s, or a butcher’s or the equivalent of the West End’s Roots and Fruits, though regeneration has given it great music venues such as the Old Fruitmarket, and acres of designer shops.

It is also lacking in green space and play areas for children. Residents are campaigning to turn Ingram Street car park into a park. The centre of George Square’s cracked concrete will be improved over the next couple of years – an architect design commission was recently awarded to architects John McAslan and Partners.

Locals also want a range of accommodation, not just student cells and boxy apartments.  And that could be attractive  post pandemic. The lovely loft apartment, big enough for two or three people in a family to work from home, was the promise of industrial area conversions – but it is a promise all too rarely delivered on.

That kind of special feature could help Glasgow City Centre to compete in the battle to attract digital nomads, and businesses perhaps looking to relocate from expensive London. Another advantage is the rail network which makes it easy to get to the countryside for a change of scene. You can jump on a train at Queen Street or Central and be at Loch Lomond or Ayr’s seafront in an hour.

The area was very different when the Cafe Gandolfi first opened

At the heart of the area’s long, slow regeneration is the Cafe Gandolfi, owned by Seumas MacInnes. When I spoke to him recently, he was getting ready to reopen after what he described as the toughest year of his life.

To describe it to someone who has never been there, the Gandolfi is a restaurant serving quality Scottish produce, often with a twist. It is the only mainstream place where I have taken three Vegans who all ordered something different and were delighted. A revolving door leads into a dark, wooden interior with a long bar, and a friendly, convivial atmosphere, a place where friends meet for long lunches and where you might catch a glimpse of a well-kent face, an actor, a writer or a politician.

A genuinely iconic feature is the furniture, an early commission for Tim Stead, a master craftsman and genius with wood. Edinburghers might be more familiar with the Millenium Clock in the Museum of Scotland whose intricate clockwork is an hourly draw for visitors. The high backed Gandolfi chairs and round tables are in the process of passing from contemporary furniture to something grander – works of art. They are also extremely comfortable to sit on.

The Gandolfi was in the vanguard of the area’s restoration. When it opened, the area was in decline. There were leather works and other factories, many gap sites and abandoned buildings. The streets were dark and empty at night. Seumas took it over in 1983 from fellow Hebridean and art school graduate Ian Mackenzie who opened it in 1979, naming it after the photographer Louis Gandolf.

Son of the famous Gaelic singer Flora MacNeil from the isle of Barra, Seumas was introduced to the world of hospitality by neighbours. “I was one of five siblings. We grew up on the Southside of Glasgow where we had some neighbours who were older and didn’t have children. They would take my older sister and me out for lunch. I loved the drama of eating in a restaurant, the theatre of it. For me it was just like going into a different world.”

The island connection is strong at the Gandolfi and there have been many Hebrideans among the restaurant’s staff over the years. It is also a family business – Seumas’ twin sons are also employees – Donald is the general manager and Alasdair is a chef.

Talking to Seumas on our visits over the last year has really brought it home the challenges that many business owners have had to face this last year: balancing the responsibilities they feel to staff and family with uncertainty over how long they can keep feeding the monsters of overheads; struggle to access government help which in many cases fell short of what they needed 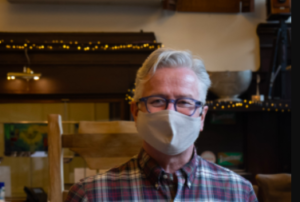 “I worried we were going to lose everything”

This last year has been the toughest in Seaumas life. “I was worried we were going to lose everything we have worked for over the years, and that we would let a lot of people down.” During the first lockdown, Seumas would rise and dress for work as usual at 7am and fret, wondering what to do with himself. He took to going for long walks, and then started baking, leaving small gifts for shielding neighbours on their doorsteps. When the church was open, he would often seek refuge in there to pray and think.

The Gandolfi’s sister restaurant Gandolfi Fish won’t be reopening – it went into receivership. The family home was sold and Seumas and his wife Donalda MacKinnon, former head of Gaelic programming for BBC Scotland, moved temporarily into a rental flat. “These weren’t really choices. I just had to make some hard decisions to save the business.”

The periods of opening up and locking down, sometimes at short notice, were difficult too. “We have had to learn to manage our supply chains much more carefully. The first time we had fridges full of food. We put it in the freezer – but it was months before we opened again and we had to throw a lot of it away.”  On one other lockdown, a load of fish had just been delivered – so Seumas made Cullen Skink for the local soup kitchen. He is very aware that many people have experienced even tougher times.  “Like a lot of businesses, we have had to take on debt to get through. But we have survived. Now we are excited and delighted to welcome everyone back.”

Will the area recover from the pandemic and reach its potential?

It remains to be seen what the future holds for Glasgow City Centre, its businesses and communities. Some shops and bars may not reopen. Businesses may not renew their lease on offices, leaving them empty.

Nicola Sturgeon talks of the 20-minute neighbourhood – like Paris’ 15-minute ones. Carbon reduction targets will require rethinking the way cities are organised. Scotland also has ambitions to be a world-class place for children and young people to grow up.

Scotland recently incorporated the UN Convention on the Rights of the Child into Scots law. It has aspirations to be one of the best places in the world for children to grow up. But if that is to become a reality, it will have to become visible in our cityscapes. But if you wander through the centre of Glasgow, you don’t see any obvious provision for the young.

Time to involve the “Imagineers” to bring some childhood magic

It might be a good idea to involve “imagineers” from the Children’s Parliament. They have facilitated consultations in areas across Scotland where groups of primary pupils wth the fresh eye of childhood reimagine how their neighbourhoods could look. With the help of artists, they create 3D models and murals which they display in the community, in the hope that some of the magic will rub off on their elders.

We can also take ideas from other countries. I spent a couple of years living in Boston which has accomplished one of the best regenerations of an inner city in the world. In the 1950s, it was subject to the first mass slum clearance programme. Overnight bulldozers smashed through vibrant, mainly immigrant neighbourhoods, making many honeless. One house survived, thanks to a robust Italian family who mounted a round the clock vigil and refused to leave. Huge motorways were built, cutting the area in two and the area became depopulated. 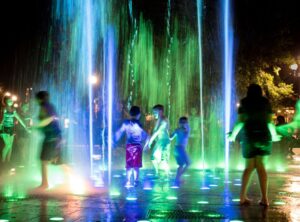 Many years later, attempts to regenerate the dying area centred around ‘the Big Dig’ whereby large portions of the inner city motorway were buried. Above this is now a ribbon of green, the Rose Kennedy Greenway. It is laid with gardens, play areas and fountains. My favourite fountain is called “The Rings’ – it is a series of lights and jets of water which play in ever-changing sequence. It is only on during the summer for a few hours a day, and I am not sure how suitable it would be for the Scottish climate, but it is wonderful to hear the squeals and laughs of children playing in it on a summer evening.

A remaining junction of flyover motorway leading to the famous Zakim Bridge has been invigorated by putting a huge skatepark underneath. The Lynch Family Skatepark is floodlit at night – you can see it for miles, and the road above keeps the worst of the weather off it.  It would be great to see some big, bold youth-friendly ideas like that in Glasgow’s City Centre. 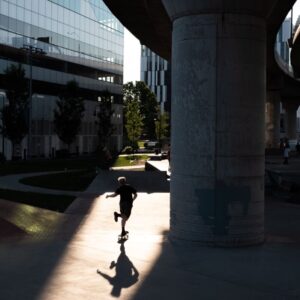