A dozen white-painted cottages strung along the seafront harbour in the hamlet of Diabaig look out on a postcard-perfect West Highland vista – but there are few inhabitants to enjoy the view. Ten of them are second homes, several occupied for just a few nights per year. One has been visited only once in five years. Neighbours boarded up the door after a storm but the owners don’t even know about the damage. 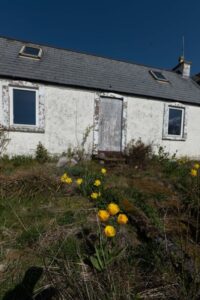 This tiny village, nestled at the foot of the Torridon mountains in Wester Ross, makes an interesting case study for the second homes issue that concerns many voters in the Highlands. Parties such as the Greens, the SNP, and Andy Wightman all have proposals to regulate them in different ways and to help local people find housing.

Amanda Lastrdrager and her husband Aart, started award-winning restaurant the Gille Brighde in the old school house here. They would love to see some of the houses made available as long term lets. “I don’t have a problem in principle with the idea that someone earns their money and they want to buy a second home, but the extent of it does affect the experience of living here. I don’t  really understand why people buy a house and then visit for two weeks a year – why not just rent? We would like to have more neighbours – there might be people who wanted to work in the restaurant, or get involved in other projects.”

In this fragile, rural community, the row of dark windows along the harbour each evening adds to the sense of isolation. Amanda doesn’t drive, the WiFi and phone signal are unreliable and there are times when it feels important to have friendly doors to knock on. 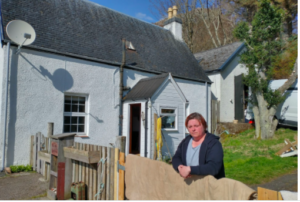 But it is a tricky problem to solve. Most crofters rent self-catering accommodation in the summer months as a traditional and vital mainstay of their diverse operations. The cottage at Number 11 small bothies at Tigh Brachen and others are owned by residents, and are normally full for six or seven months of the year.

And many second home owners have strong relationships with the place and may plan to retire there eventually. Neil Gregory is a case in point.  “It is dreamweaving. People buy houses in a place like this because they imagine themselves spending time here. But then life gets in the way.” 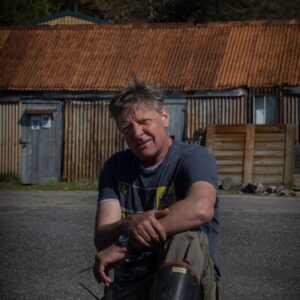 Neil’s parents first holidayed in Diabaig in 1947 when they camped. After falling in love with the place, they took a house each summer on the seafront –  Alta, so-called  because the inhabitants emigrated to Alberta. A decade later, Neil’s mother Ellen, a graphic designer whose main claim to fame is that she drew the Fairy Liquid baby still in use today, caught a train north from the south of England the day after hearing that the old post office was for sale.

“The house had been bought as a holiday place by people who never used it – it was just at the point where the sheep were getting in.” The family spent summers there, renovating the place. After his parents and sister died, Neil managed to hang onto it. “Whenever I felt I could get away, I would rush here with my hair on fire, spend two nights in the cottage and go away again”. But a few years ago, Neil decided to retire to the village and now it is his main home – although he often chooses to spend part of the winter travelling in warmer climes.

Neil remembers the Gaelic speaking MacKenzie family who were the last full-time inhabitants of the abandoned  Ceol na Mara and the beautifully kept garden it once had. But- “as far as I am concerned, if someone buys a house and doesn’t visit it for five years, that is their business.” He would be keener to see incentives to encourage long term lets than restrictions on ownership. 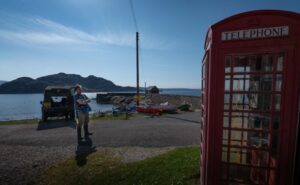 The SNP are considering examples such as in St Ives in Cornwall which opted for a ban on second homes following a referendum in 2016 when 80% of locals voted for the measure.

Local authorities can take enforcement action if owners aren’t using homes as their principal residence. They are also promising a special “island bond” involving incentives of up to £50,00 to encourage young people to move to the islands. Finance Minister Kate Forbes has pledged to look at creating more tax disincentives. Second-home buyers already have to pay additional land tax.

The Scottish Greens manifesto says: “Using a property as a second home should require planning consent – this would boost the supply of housing in rural areas. We will support new legislation to enable development in the public interest where land is in fragmented ownership.”

Former Green Andy Wightman, who is seeking re-election as a Highlands independent MSP, wants councils to obtain the power to levy a capital gains tax on those who sell main residences as second homes as part of a package of change. He said: “Priority should be for local people within designated housing pressure zones, and councils should be given pre-emption rights so that houses can be sold at a valuation set at the local housing market rate.”