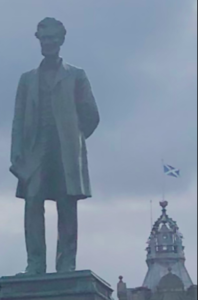 On an urban wander this week,  I came across this statue of Abraham Lincoln. It is in Edinburgh’s Calton Burial Ground and commemorates the Scottish soldiers who fought for the Union in the US Civil War of 1861-65. It was interesting to find a link to that period, as I have just started to read ‘ “How the South Won the Civil War”, by Heather Cox Richardson, who traces a line from the US’ powerful while oligarchy of today to this conflict.

According to one account, there were about 50,000 Scots in the Union army – but they were very much assimilated into US culture and didn’t tend to form their own brigades so they are hard to count. There were notable people among them, including five sons of James and Agnes McAllister, who ran the first stop on the Underground Railroad, just across the border into Pennsylvania from Maryland – one son died at Vicksburg. Their two daughters nursed the injured after the Battle of Gettysburg.

But like the US itself, Scotland was divided by the Civil War – across town in the Dean Cemetery an obelisk decorated with confederate flags commemorates Edinburgh-born Colonel Robert Smith, a friend of the white supremacist Confederate leader Jefferson Davis.

There was strong support for the abolitionist movement – when former slave and human rights campaigner Frederick Douglass traveled around Scotland on a lecture tour in the 1840s he was warmly received with full houses and wrote “No insults to encounter here – no prejudice to encounter, but all is smooth – I am treated as a man and as an equal brother.” Douglass’ visit strengthened feelings over donations the Free Kirk had accepted from slave owners in the US  – the Ladies Emancipation Society of Edinburgh carved: “Send Back The Money” in giant letters into the turf by Salisbury Crags.

But there were Scots too on the other side – and some claim that the Civil War would have ended sooner if it had not been for the “blockade runners”. There were fortunes to be made in taking arms to the South and bringing cotton back. Most of these boats were built on the Clyde and many Scots crewed them – one successful runner Captain David Leslie built a string of seafront villas in Dunoon called names like ‘Dixie’ and ‘Wilmington”.

I read a blog post suggesting that the first shots in the US Civil War were fired by Scots in North Carolina who regarded themselves as motivated by opposing what they saw as the King-like power of the Presidency. But of course, slavery was the economic engine of the South – the value of the slaves was more than all other industries combined.

There is another graveyard in Boston I often used to visit when I lived there. Copps Hill has the graves of many free black people who lived in the area and a plaque records that legal action against slavery began in the 1760s. It reminds you what a long struggle it was – when in 1775 the American Revolution began, with all its rhetoric of inalienable rights and freedoms and the pursuit of happiness, the battle seemed all but won.

The Declaration of Independence of course drew on the Declaration of Arbroath, and almost half of the signatories were of Scots extraction. At the time, it seemed the rights they were talking about were universal. But for monetary motives, people like George Washington and Thomas Jefferson carried on owning slaves.  In his book  Revolution Song, Russel Shorto recounts the anger and disappointment felt by African Americans like Venture Smith at this betrayal.

Edinburgh has another link here – a new plaque at the foot of a statue of Henry Dundas atop a huge neo-classical column in St Andrews’ square, records that Dundas ​​ “While Home Secretary in 1792, and first Secretary of State for War in 1796 he was instrumental in deferring the abolition of the Atlantic slave trade. Slave trading by British ships was not abolished until 1807. As a result of this delay, more than half a million enslaved Africans crossed the Atlantic.”

For a while in the early 19th century, slavery seemed to be in slow retreat. But by the 1850s,  anti-slavery advances were being rolled back and it was being introduced into more states. The laws against helping fugitives were strengthened. The family at McAllister’s Mill in Pennsylvania were taking serious risks when over that decade, hundreds of people hid in their basement, including almost certainly the legendary Conductor Harriet Tubman, who must have passed that way several times in those years.

In the long century between the first legal action against slavery in Massachusetts, and the abolition of slavery in the US in 1865, many lives were destroyed, many patient hands took up the burden in whatever way they could  – but the struggle for justice and human rights for all continues.